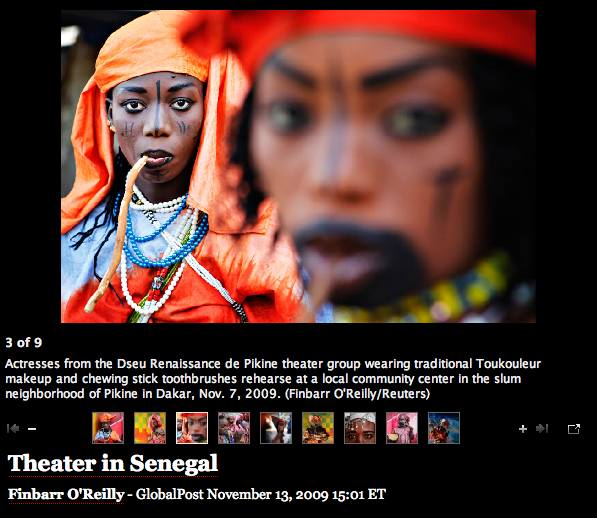 GlobalPost brings us a feature by photographer Finbarr O'Reilly. The photographer came across performers of the Dseu Renaissance de Pikine theater group, and was smitten by the intense colors he saw when the female artists put their traditional headscarves and applied black makeup and markings worn by the Toucouleur people of West Africa.

The "Toucouleur" possibly originates from the French (slightly misspelled) meaning "all-colors", and are Muslims who live mostly in the Senegal River Valley in Northern Senegal and Southern Mauritania.

Finbarr O’Reilly joined Reuters in 2001 as a freelance text correspondent in Kinshasa, Congo and spent two years covering Central Africa’s Great Lakes region from Kinshasa and from Kigali, Rwanda. He took up photography full-time in 2005 and covers West and Central Africa for Reuters, based in Dakar, Senegal. In 2006, he was awarded the World Press Photo of the Year.
Posted by bella at 3:14 AM