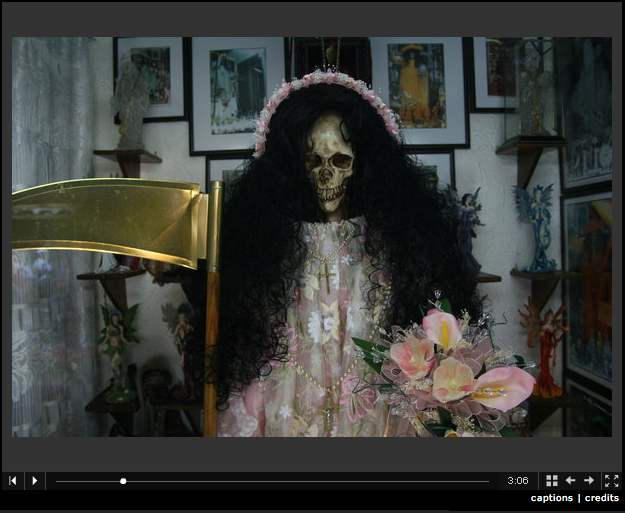 Here's an audio slideshow of photographs by Lorne Matalon of La Santa Muerte, which is a saint-like figure worshiped and venerated in Mexico, probably as spiritual fusion of Mesoamerican and Catholic beliefs. Its cult attracts those who are inclined to seek the non-traditional ways for spiritual solace, and many of its followers live outside of the law.

Lorne Matalon has been reporting from Mexico for The World since November 2007. He covered the Mexican 'war on drugs' from the front lines, going on patrol with the Mexican armed forces. He also covered immigration and economic stories from south of the border. He worked at NPR Member Stations WUNC and WBUR, also filing for NPR from Haiti, Panama and Mongolia. Lorne is a contributor to National Geographic's Ethnosphere Project and a National Fellow at the Explorers Club of New York.

While in Mexico City, I visited Tepito, the infamous barrio where many of Santa Muerte sanctuaries are found, and produced my gallery: La Santa Muerte.

More posts on La Santa Muerte appeared here.
Posted by bella at 3:52 AM