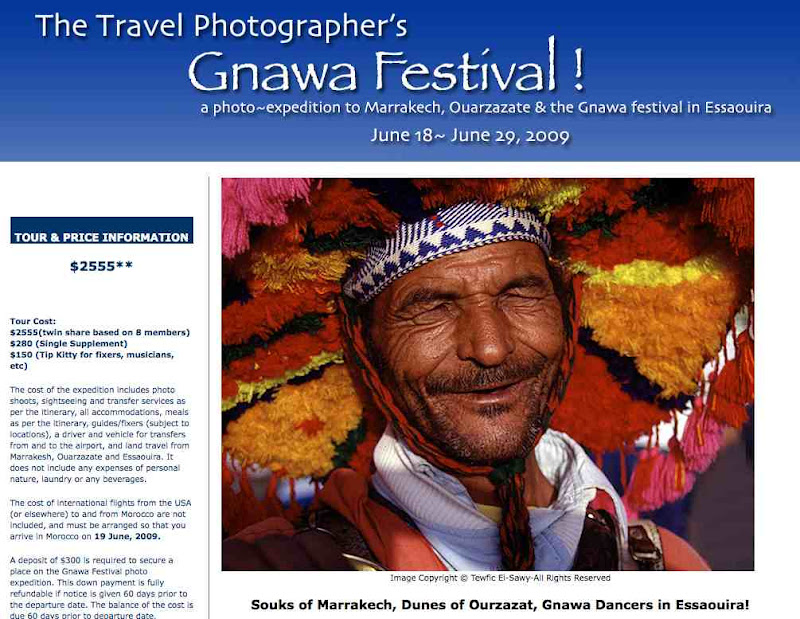 I am leading the Gnawa Festival Photo~Expedition from June 18 to June 29, which will include street photography in the bustling souks of Marrakesh, in the desert city of Ouarzazat (or Ourzazate) and 4 full days of the Gnawa festival in the coast town of Essaouira. For good reason, the expedition was sold out very quickly.

From Wikipedia: "Gnawa or Gnaoua (غناوة) refers to an ethnic group and a Sufi religious order in Morocco, in part descended from former slaves from Sub-Saharan Africa or black Africans who migrated in caravans with the trans-Saharan trade, or a combination of both."

The Gnawa musicians deeply hypnotic trance music (as befits their Sufi affiliation) play hypnotic trance music, repetitive and very rhythmic, which is accompanied with loud hand-clapping and cymbals, while the Gnawa dancers twirl the long tassels on their caps with their head movements. Their songs call on revered saints (also known as marabouts) to drive out evil, cure psychoses, or cure scorpion stings.

An article in the New York Times on the Gnawa Festival last year gave me the idea to set up the photo~expedition.
Posted by bella at 4:40 AM