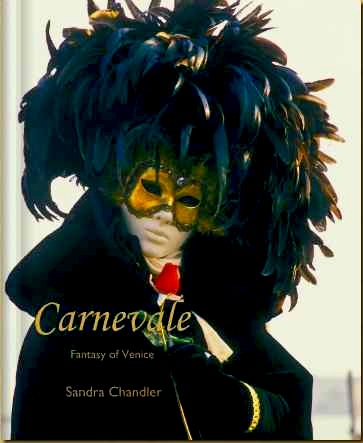 Sandy Chandler has just published her new book ‘Carnevale, Fantasy of Venice' of her beautiful photographs of Venice and its magical Carnevale. One can preview the book here.

Her introduction in the book reads :

Venice is one of the world's most picturesque cities and as a backdrop, Carnevale is shown as a vivid, vibrant colorful dream. The excitement of this twelve day celebration is all part of a spectacular journey. It was my dream to photograph and capture the spirit of the magic and excitement of this real life fantasy - Carnevale.

Sandra is a photographer and interior designer based in San Francisco. She tells us that color, smells and sounds drew her to world travel. Her city's Asian culture first enticed her to China in 1978 when the People’s Republic first opened. She then continued her exploration of Asia by traveling to Bhutan, India, Japan, Singapore, Nepal, Thailand, Tibet, and on to South America and Europe. Her website is here (LINK).

The book will be celebrated on May 7th at:

The Travel Photographer blog had a previous post on Sandra here. (LINK)
Posted by bella at 3:56 AM