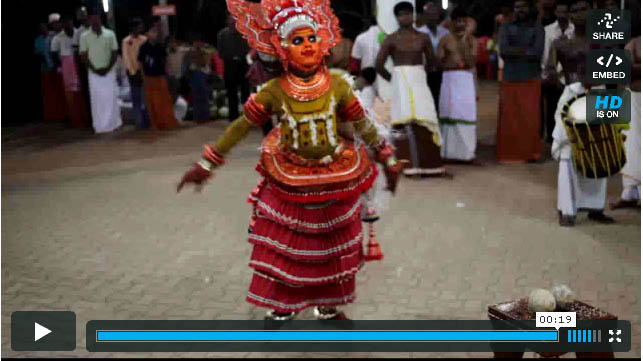 Here's a short snippet of raw video captured on my Canon 5D Mark II during one of the many Theyyam ceremonies witnessed during my Theyyam of Malabar photo expedition in Kerala (India). The camera used was the new Canon 5D Mark II...Nothing fancy. I just pointed and pressed the button. I still have quite a few others that are lengthier which will be worked on using iMovie etc. Audio was captured via the camera's microphone. However, I've recorded excellent audio with my new Marantz PMD-620 which I'll use for forthcoming projects.

Theyyam rituals are indigenous to north Kerala, and the actor-dancers incarnate local deities to foretell the future to devotees. Incredible imagery and action! For more information on the Theyyams photo expedition, go here.

I chose not to embed the video in this post because it looked a bit jerky when I did, so click on the link instead of the image. This will open my video page on Vimeo. You may want to go full screen to get a better feel for the action.
Posted by bella at 3:58 AM