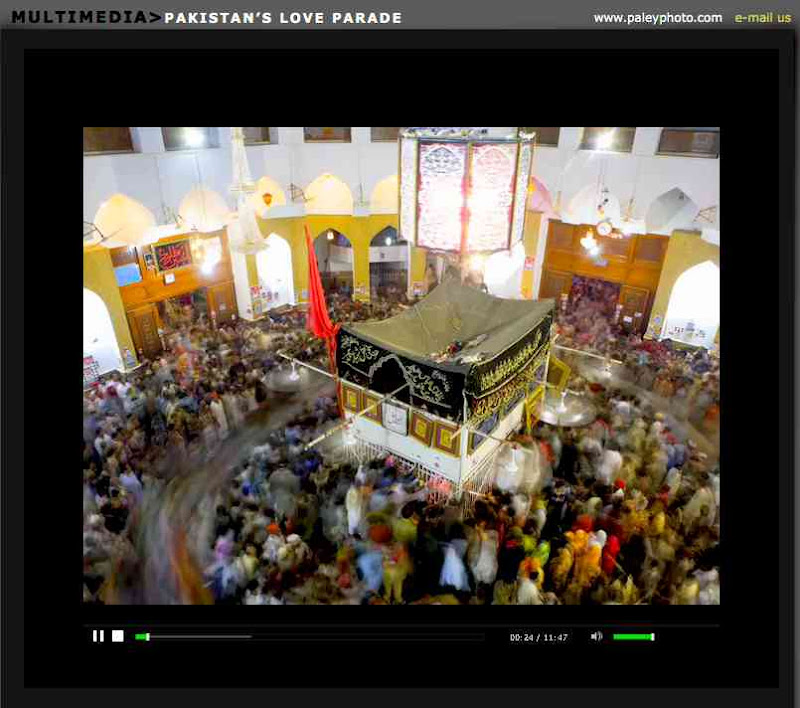 Here's a multimedia feature by Matthieu Paley titled Pakistan's Love Parade. I initially thought it dealt with a Pakistani gay parade of some sort, but it turned out to be a remarkable (and lengthy, at almost 12 minutes) reportage on the annual festival of Hazrat Lal Shahbaz Qalandar when, as writes Matthieu:

"For three days and nights, over one million Sufi pilgrims, devotees and onlookers join an infectious chaos of swirling and dancing; a firework of emotions and sensations; non-stop rhythmic drumbeats echoing through a heady hashish haze."

What an incredible way to describe it! I certainly wouldn't need the hashish to be exhilarated by the sound, sights and smells!

A bit of background: Hazrat Lal Shahbaz Qalandar (1177-1274) was a Sufi saint, philosopher, and a poet, born in Afghanistan and who settled in Sindh (Pakistan). He preached religious tolerance among Muslims and Hindus, and is buried in the dusty desert town of Sehwan Sharif, where thousands of pilgrims visit his shrine every year. Hindus and Muslims alike express their devotion through trance dances and devotion for Lal Shabaz Qalander, who is considered as one of Sufism’s most venerated saint, whose message of love and tolerance some 800 years ago still powerfully resonate with his followers.

Matthieu Paley is an Asia-based (living in Hong Kong) photographer specializing in editorial and documentary photography. His work appeared in Geo, National Geographic, Newsweek, Time, Outside, Discovery and various others.
Posted by bella at 3:53 AM