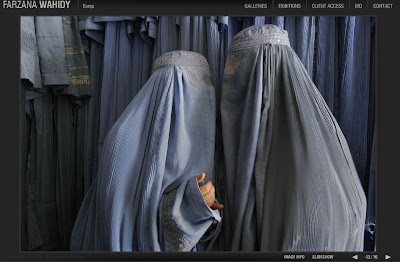 At the age of 24, Farzana Wahidy has been a photographer for Agence France-Presse and the Associated Press. She was born in Afghanistan but now resides in the United States. The National Geographic All Roads Film Festival recently recognized her work by awarding her seed money and equipment to assist in her field work.

In an interview, she said:

" I wasn’t at all interested in photography before. I wanted to be a journalist. I thought I could travel around as a journalist. I wanted to tell the world about the situation in Afghanistan. Above all, I wanted to be free and independent. I always had to work to support my family. One day, I found out about these film and photojournalism courses and I applied. I was 17 -- I thought they wouldn’t accept me because I was too young. So I changed the date of birth in my passport. Two weeks later I found out I had been accepted."

Farzana was initially trained at Aina Photo Agency (founded by Reza), and her work in Afghanistan is remarkable. It underscores how many indigenous photographers and photojournalists are often better storytellers than non-indigenous professionals, and gives the photographs an imprimatur of authenticity..
Posted by bella at 4:40 AM