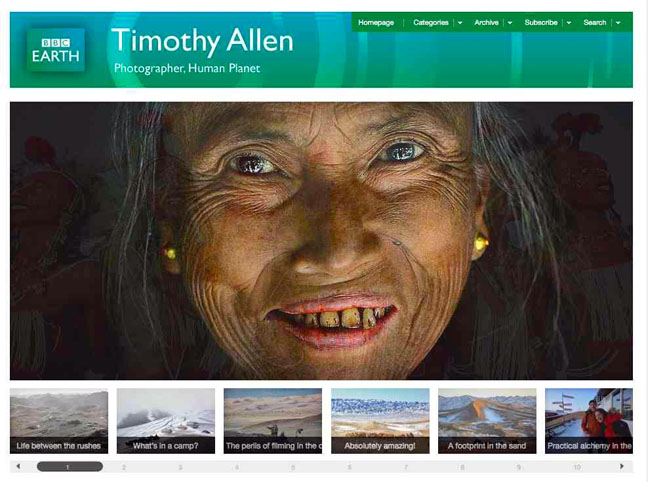 I was pleased to receive an email from Timothy Allen announcing that he is writing a weekly blog for the BBC documenting his work with indigenous societies around the world for the documentary Human Planet.

Human Planet is a new 8×50 minute documentary series being made by BBC Television. The series celebrates the human species and looks at our relationship with the natural world by showing the remarkable ways we have adapted to life in every environment on earth. It is due to be transmitted in the UK in October 2010 and will be rolled out across the world soon after.

Timothy Allen is a English photographer with a hefty professional background, including the Sunday Telegraph, The Independent and Axiom Photographic Agency, and who has won prestigious awards such as 6 Picture Editors' Guild Awards including the title of Arts Photographer of the Year. More recently he was the recipient of the 'One Planet, Many Lives' award in Travel Photographer of the Year for his work with the indigenous cultures of the Himalayas. The focus of his recent work has been on the planet's remaining tribal societies, and he currently devotes his time to documenting the diversity of humanity's cultural heritage. He has worked with indigenous communities throughout the world , most extensively in India and South East Asia.

This is a blog which is certain to enchant, educate, and delight those of us who are passionate about travel photography, ethno-photography and interested in our humanity's cultural heritage. Bookmark it, and visit it often!

For Canon 5D Mark II fans: check out the short video made with a Canon 5D II during a tribal dance in Niger.

A previous TTP post on Tim Allen's Nagaland work is here.
Posted by bella at 4:02 AM