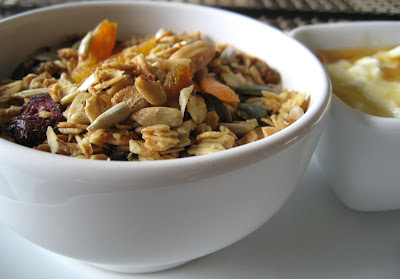 Bill Granger is famous for his breakfasts and you just know his recipes are going to taste good.

I love muesli and granola, and mostly only make enough to fill a large storage jar, so that I can quickly move on to the next recipe.

The recipe Bill gives, is a blueprint really, and one that you can easily adjust to suit any particular whims you may have at the time you make it.

I cooked the cereal on a conventional oven setting but it didn't seem to brown and crisp and so I popped the fan oven on and it very quickly browned and crisped up.

After going to Tom's Kitchen for brunch and eating granola, I wanted to reproduce something similar. This wasn't as rich as Tom's granola but tasted every bit as good!

Oh! nearly forgot - you will need a small dish of Greek yogurt drizzled with honey to go alongside!! 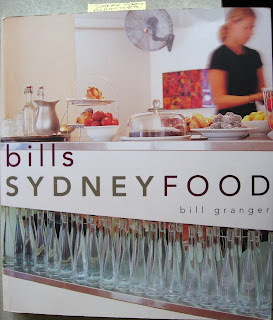 If you make the full quantity it will yield 1.5kg.

1. Preheat the oven to 170°C(325°F). Place butter, honey and vanilla in a small saucepan. Cook gently over a low heat, stirring occasionally, for 5 minutes, or until the honey and butter are combined.
2. Place the remaining ingredients, except the fruit, in a large mixing bowl and mix well, Slowly stir in the butter mixture, making sure that each grain is evenly coated.
3. Spread the cereal over two baking trays and bake in the oven for 25 minutes, or until the grains are crisp and very lightly browned. Stir occasionally to prevent the mixture from sticking to the baking dish. Also, check that the grains aren't over browning.
4. Remove the cereal from the oven and allow to cool.
5. When the cereal has cooled, add the dried fruit and stir evenly through the grain mixture.
6. This can be stored at room temperature in an airtight container for up to 1 month.

Here is a link to a couple of other granola recipes.
Posted by bella at 12:02 PM