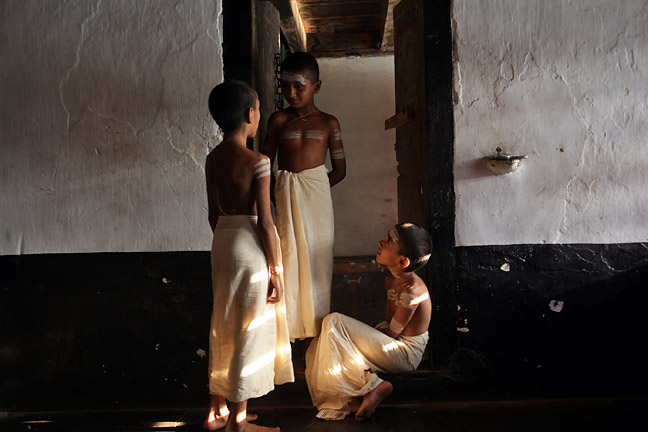 Photo ©Tewfic El-Sawy-All Rights Reserved
In my previous post, I gave my verdict on my Theyyams of Malabar Photo-Expedition from the logistics/objectives standpoints. This post is about what worked and didn't work as far as my photography was concerned.

As I much prefer natural light, I seldom use flash on any of my travel assignments or group expeditions, and I haven't used it much this time either. For one thing, using a flash on the Theyyams themselves was discouraged by our fixer. This was an upfront and quite reasonable request by the organizers of these temple rituals, since the Theyyams (whose bodies are inhabited by various gods during the rituals) mustn't have flashes distracting them from uttering their oracle-like pronouncements. Doing otherwise would've been not only disrespectful, but potentially blasphemous to the local folk.

Some in our group used flash photography during the initial makeup sessions, as well as during some of the evening rituals, but with noticeable moderation...always avoiding the Theyyams themselves. I used it a few times with a diffuser, but to be honest I wouldn't have missed it had I left it in my hotel room.

This photo expedition saw the real inaugural use of my Canon 5D Mark II. Being used to the comparative dinky display of my Canon 1D Mark II, I initially struggled with the 5D's extra-bright LCD display, and sought to underexpose my shots until I realized that the camera's exposure was spot-on most of the time. I used its High Definition video capability during the Theyyam rituals, and the little I've seen of the movies so far has been impressive. I wasn't successful in finding an extra battery of the Canon 5D Mark II before leaving to India, but found that I didn't need it even after 6-8 hours of almost continuous photographing! However, I used my Canon 1D Mark II as well so the 5DII did get some respite. What I really liked was that its battery got fully recharged during the time it took me to have dinner.

I think the new sound recorder Marantz PMD 620 performed very well. I recorded many tracks to include Qawwali in the Sufi dargahs of Delhi, the Theyyam rituals in Kasaragode, The Vedic chants and the Kathakali performance in Thrissur, and I'm quite happy with the results. When I have a chance to edit the tracks, I'll try to post a more thorough review of the recorder. My thanks to Benjamin Chesterton of duckrabbit multimedia who shared a very worthwhile tip for this device...it made it so much easier to operate!

Prior to my departure, I solicited advice from photographer Alessandra Meniconzi as to her environmental portraiture, and I'm ashamed to admit that I completely forgot to apply one of her tips whilst photographing. I'm tempted to blame jet-lag for the memory lapse, but it was a "senior moment".

Two things I forgot to mention on my previous Verdict post: I should have allotted more time for the photo shoot at the Vedic school since the ambient light was just phenomenal (see above photograph), and I should have timed the walk-about in the streets of Mattencherry in the late afternoon.
Posted by bella at 10:00 AM