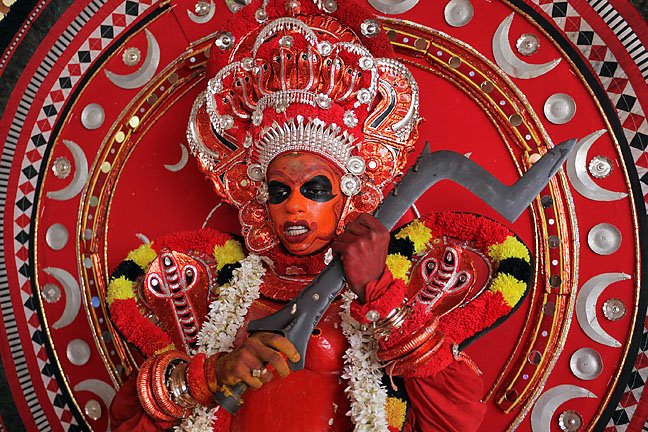 Photo ©Tewfic El-Sawy-All Rights Reserved
It is my custom to write on what worked and what didn't following each of my photo-expeditions. It's certainly a subjective exercise, and many readers may peruse this post and conclude it's just a self-pat on the back. It may well be that, but it's well deserved in my view...and that's what's important to me in the end...(see? that's why I get to have "opinionated" in the title of this blog.)

Each one of these objectives were met and more. Our expectations were dwarfed by the pageantry of the Theyyam rituals, and by our unfettered access to the performers of this ancient religious rituals. We had a private Kathakali performance all to ourselves, which included 4 solid hours to photograph the dancers' makeup sessions and preparations, followed by a unique performance by some of the best practitioners of this art form in Kerala. The third and last objective was to photograph inside an ancient Vedic 'gurukul' in Thrissur, and we did so with the courteous assistance of its faculty and administrators. We were treated to a demonstration of this way of teaching sacred scriptures in the ancient 'gurukul'. 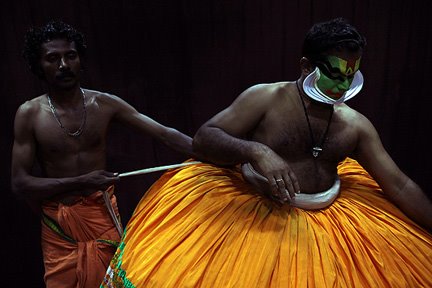 Photo ©Tewfic El-Sawy-All Rights Reserved
Other highlights of the photo expedition was photographing at the sufi shrine of Nizzam Uddin in Delhi on a Thursday evening, when the traditional Sufi music of qawwali is performed...another was photographing the backwaters of Kerala, the Chinese fishing nets of Kochi, and the 500-year old Arab godowns of Mattencherry with its nutmeg, ginger and tea stocks.

The logistics of the expedition worked well however, should I decide to repeat it next year, I will reverse its routing. We drove from Mangalore south to Kochi and Allepey, but it would have made more sense if we flew from Delhi to Kochi, and then drove north to the Kasaragode area for the Theyyams. In my view, it's always preferable to have the main highlight of the trip at its end than at its outset.

All of the hotels on our itinerary were fine, well appointed and offered the best accommodations in the area. I didn't particularly like the final night's hotel in Delhi despite its proximity to the airport, and should there be another similar photo expedition, I will have the agent choose another one.

Much of our success at the Theyyam rituals was due to Vinay; a local schoolteacher who was instrumental in identifying and getting us access in the temples where these rituals were held. He counseled us as to what we needed to watch out for, and suggested that we minimized the use of flash while photographing the Theyyams themselves. Otherwise, we were free to circulate as we pleased. We were welcomed with generosity and kindness...and were often given fresh coconuts to drink and tasty bananas as gifts.

I was interviewed by Malayala Manorama newspaper while photographing the Theyyams, and it was a thrill to see a picture of us at work on the pages of this important daily newspaper...it's the largest regional circulated newspaper with a readership of over 16 million.

I was extremely surprised to notice that there were no foreign tourists and photographers at the Theyyam rituals. The first foreign tourists we saw on this trip was in Old Kochi on the last 2 days of the itinerary...otherwise, the Theyyams of Malabar photo-expedition was completely tourist-free. Always an immense plus in my books!
Posted by bella at 8:07 AM