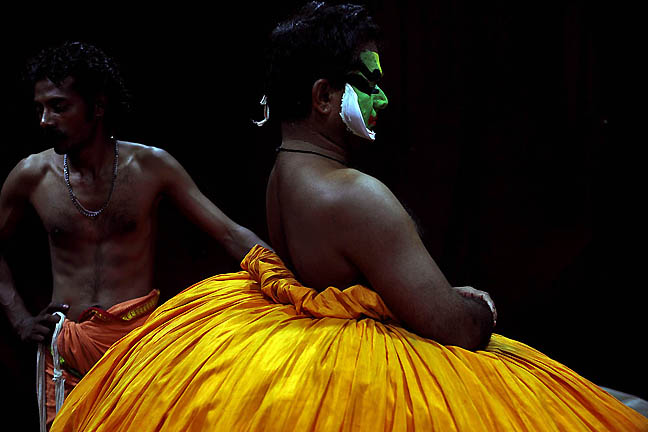 Photo ©Tewfic El-Sawy-All Rights Reserved.
Here's my Katha'kali gallery...images from a private photo-shoot at a Kathakali school in Thirssur during the Theyyam of Malabar Photo~Expedition. I plan to create a multimedia slideshow of these and other Katha'kali images shortly.

I scheduled the private photo-shoot because I'd had the experience of photographing a Katha'kali troupe in Kochi a few years ago just before they performed their art, and the room was overcrowded with tourists. I didn't want to experience the same difficulties and restrictions during the photo-expedition. As a consequence. we had complete access to the actors while they were applying make-up, wearing their fabulous costumes and to their performance, all to ourselves!

Katha'kali is the dance-drama of Kerala, in which its performers (all men) wear fantastic make-up, billowing costumes and enormous crowns. Katha'kali has been described as "The Passion Play of Hinduism" and while its origins are unclear, its current format is traced to the 16th century. It's based on the Ramayana, the Mahabharata, the Gita of Jayadeva and other religious narratives and poems. The actors themselves do not utter a word...singers and musicians provide the narrative and musical backdrop.

The actors endure a long and difficult training period. They are taught to project emotions with distinctive facial expressions and hand gestures. Some of the actors insert a seed in their lower eyelid in order to redden their eyes, as part of the 'look'. The application of the make-up is an art form, and requires several hours to complete. This is done by artists who've spent a decade or more of training.
Posted by bella at 4:23 AM