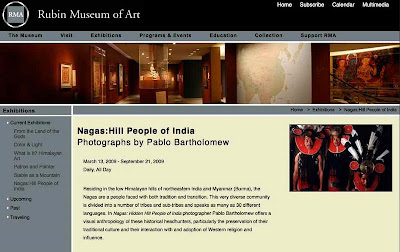 As promised in an earlier post, I dropped by the Rubin Museum of Art yesterday to see its new photographic exhibit: Nagas: Hidden Hill People of India by Pablo Bartholomew.

Pablo Bartholomew is an independent photographer based in New Delhi, who worked as a photojournalist recording societies in conflict and transition. His works have been published in the New York Times, Newsweek, Time, Business Week, National Geographic and Geo amongst other magazines and journals.

The exhibition of about 20-25 prints is held on the lower floor of the beautiful Rubin Museum (I'm struck by its incredible aesthetics every time I visit). The exhibit is also sponsored by Air India.

The photographs are of the Nagas, erstwhile headhunters of India's easternmost state, and were mostly made during the early 90s, when presumably Pablo visited. In all candor, I wasn't overly impressed by the photographs, and while I don't regret seeing the exhibit, I was disappointed. I haven't learned much about the Nagas from the photographs either, although I now know that some of the elder headhunters wear a necklace with small carved wooden heads, for how many they allegedly hunted. It's naturally against the law now.

The photographs' sizes seemed to be in the range of 18x24 to 20x24 and were frameless, encased in a sort of thin Plexiglas. I think the product used is FotoFlot, which was mentioned on my blog here.
Posted by bella at 3:56 AM