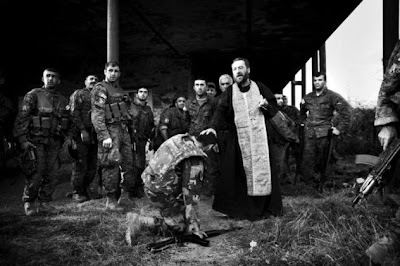 Of the 12 professional category winners, one photographer will be the recipient of the L’Iris D'Or, the Sony World Photography Awards Photographer of the Year. On the night they will be awarded $25,000. The winning amateur photographer, selected from the eight category finalists, will receive a $5,000 cash prize.

Wojciech Grzedzinski of Poland won the award for Professional Photojournalism and Documentary - Current Affairs, with his photograph of a Catholic priest blessing a soldier in full combat gear. Since time immemorial, religion has been used to absolve the sins of war...and why not, since most religions were, and are, the cause for violent conflict.
Posted by bella at 3:34 AM