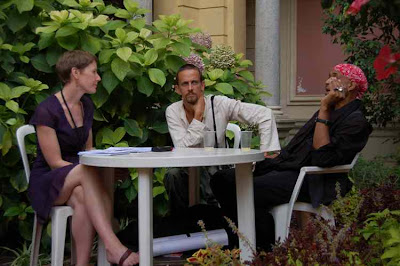 Photograph © Olivier Laurent-Courtesy 1854/BJP
Philip Blenkinsop won the Visa d'Or News awards at Perpignan's photojournalism festival for his reportage of the China earthquake. The above photograph shows Diane Smyth of the British Journal of Photography (BJP) talking to Philip Blenkinsop (middle) and Stanley Greene (right) during the event.

1854, the blog of BJP, has a number of interesting interviews from the Visa Pour L'Image, and I've gleaned some snippets which I think are particularly food for thought...at least to me.

Philip Blenkinsop: "Photographers who expect to be paid for it (their work) are in the wrong business. You should be doing it because you’re passionate about issues and injustices and want to shine a light on them and give people a voice."

Brent Stirton: "We’ve created a 24-hour news cycle to feed an advertising machine. We’ve allowed our economic motivations to outweigh where we are as a civilisation in terms of documenting that civilisation. We’re not thinking about how long it takes to really think about issues. I don’t want to think about sensational pictures, I’m thinking about meaningful, intelligent images. But I also think that the internet is an opportunity for photojournalists."

Jean-François Leroy: "France is the cradle of photography. It gave photography to the world. This festival would not be possible anywhere else. I see photography attracting people in the US or in Italy, but it’s true that France is a bit of an exception."
Posted by bella at 4:53 AM