Islam: The Month of Ramadan 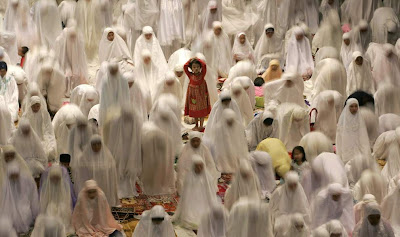 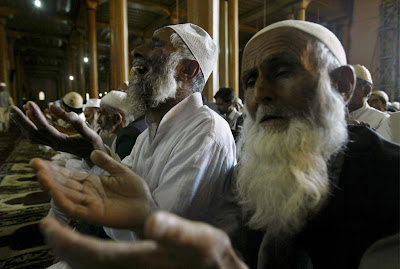 © AP/Dar Yasin
Ramadan is the Muslim religious observance that occurs during the 9th month of the Islamic calendar, believed to be the month in which the Qur'an was revealed to the Prophet Muhammad by the angel Gabriel. It is the Islamic month of fasting, in which participating Muslims do not eat or drink anything from true dawn until sunset. Fasting is meant to teach the person patience, sacrifice and humility.

The Boston Globe's Big Picture has gathered 35 photographs of Muslims during Ramadan from across the world. Two of my favorite photographs are by Reuters' Sugit Pamungkas and by AP's Dar Yasin. The first is of Muslim women praying at a mosque in Surabaya, East Java, Indonesia. The second is of Kashmiri Muslims inside the Jamia Masjid, or Grand Mosque, in Srinagar, India. Click on them for bigger versions.

If you haven't visited The Big Picture yet, you're missing out on a visual delight.
Posted by bella at 5:32 AM