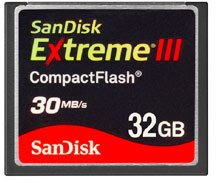 Personally, I find such an uber-high capacity rather unnerving, since I'd be loath to rely on a single card during my photo-shoots. I much prefer using a handful of CF cards of 2 and 4 gigabytes to minimize risks of card failure.

However, let's not lose sight that new DSLRs with 20+ megapixels and video capabilities are expected to come to market. A 32 gigabyte card can replace videotape, and such a capacity means over 80 minutes of 100 Mbps, 10-bit, 4:2:2 HD video.
Posted by bella at 2:12 PM