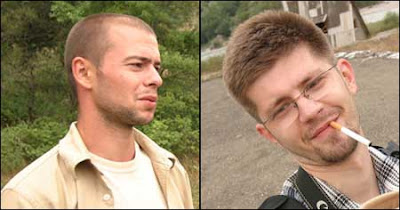 Editorial Photographers UK (EPUK) is launching an appeal for cash to help the families of a young photographer and a journalist killed during the recent conflict in South Ossetia.

Sasha (Alexander) Klimchuk was head of the independent photo agency Caucasus Images based in Tbilisi, Georgia. The 27 year old was freelancing for the Russian news agency Itar Tass at the time of his death. Giga Chikhladze, 30, was freelancing for Russian Newsweek.

They promised to take care of each other’s families should one of them die. But photographer Sasha Klimchuk and journalist Giga Chikhladze were killed in the same incident. Now their families need help.

This appeal to EPUK members – and to the wider photographic community – is to ask for donations to help the families of Sasha Klimchuk and Giga Chikhladze survive at this most difficult of times, and to help them build a future.
Posted by bella at 4:32 AM