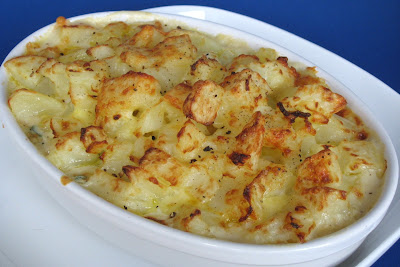 This recipe came from a recent food magazine, and is an advertisement feature for Green Giant sweetcorn, encouraging us to use sweetcorn as one of our five-a-day.

The potato topping caught my attention. You simply put cubes of parboiled potato mixed with cheese, on top of the fish pie filling, and now, I don't think I will ever top my fish pie with mashed potato ever again!

It's recommended in the recipe to use a large 340g can of sweetcorn, that's fine if you want lots and lots of sweetcorn, but I thought a 198g can would be more sensible. Fortunately, this was the right decision and gave just the right amount of sweetcorn to the finished dish. Obviously, some frozen peas can be used instead of the sweetcorn. 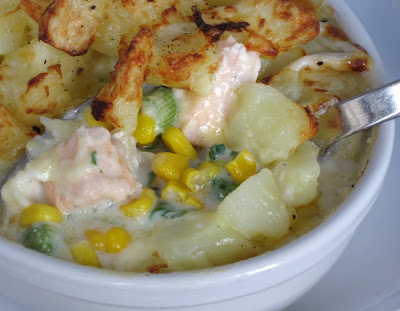 If you are reading this posting son, next time you have made a fraught journey home late at night after a hard week at work, this tasty, comforting fish pie will make the journey home even more worthwhile!! PS. I haven't forgotten your request for a crumble.

You will need: A large ovenproof buttered dish.

1. Preheat the oven to 190°C/gas 5.
2. Peel and chop the potatoes into small chunks. Boil for 8 minutes until tender and then drain.
3. Melt in the butter and then stir in the grated mature cheddar cheese.
4. Poach the fish for 5 minutes then cut into small chunks. Place in a buttered ovenproof dish.
5. Scatter over the spring onions and the can of drained sweetcorn, or alternatively the frozen peas.

1, Blend a little of the milk with the cornflour. Heat the rest of the milk in a pan, add 1 tsp powdered vegetable stock and when it is almost simmering, stir in the blended cornflour, until the mixture thickens. Cook over a low heat for 1 minute, then add the chopped parsley.
2. Pour the sauce over the fish. Top with the cheesy potatoes and then cook for 35 minutes or until golden brown.

I have been fortunate enough to be awarded some awards from my fellow food blogging friends.

My friend Jan over at What Do I Want To Cook Today has passed to me a 'Friendship' award - thank you Jan!

The 'Brillante Weblog' award has been given to me from Jan of What Do I Want To Cook Today - once again, many thanks Jan! Also the same award from Rosie of Rosie Bakes a 'Peace' of Cake, and Cakelaw of Laws of the Kitchen - to both of you thank you.

I am passing the above two awards to all the food bloggers who have visited my site over the last two years - thank you.
Posted by bella at 11:17 AM