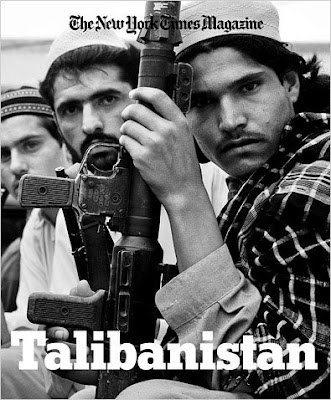 Photograph Lynsey Addario-Courtesy NY Times
It's been a long while since I've seen an intelligent and interesting article published in the New York Times' Sunday magazine, but Talibanistan (Right At The Edge) by Dexter Filkins (accompanied by the black & white photographs of Lynsey Addario) in this week's magazine is really a chilling read. Naturally, I would've liked to see more of Addario's intense photographs (perhaps also in larger format), but this article competes with the best of the British or French photo journalistic magazines.

It's quite a lengthy article, which goes into details of the situation in Pakistan and its borders with Afghanistan, and sheds light on the double-play by Pakistan's military and intelligence agencies that are simultaneously helping the Taliban, and taking money and aid from the United States. In other words, we're being played for suckers.

In summary, the reasons for Pakistan's double-play are: (i) it sees Afghanistan as an area of competition against India, its main rival-adversary and sees the Taliban as a counterweight to Indian influence, (ii) the growing popular hatred of the United States, and (iii) the Pakistani army is really incapable (and unwilling) to fight an insurgency in the tribal areas. Why should Pakistan extinguish the Taliban factions in their northern provinces if their very strengthening presence keep United States money flowing in the country's coffers?

Now what I'd like to see is a similarly candid article on the situation in Iraq, where we're paying millions of dollars on a monthly basis to the Sunni tribes so they don't kill our troops. Shining a light on the pervading corruption in Iraq would also be welcome. Next week...Sunday Times Magazine?
Posted by bella at 6:00 AM