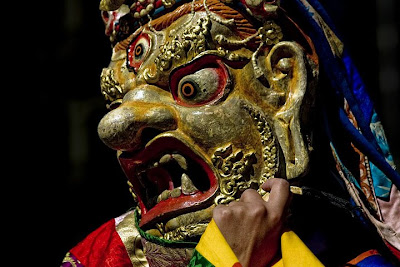 Photograph © Tewfic El-Sawy
In elaborate dress and masks, monks from Bhutan performed Cham dances at the Merchant's Gate in New York City's Central Park yesterday. The dances by the monks-dancers were in celebration of the opening on September 19 of The Dragon’s Gift: The Sacred Arts of Bhutan at the Rubin Museum of Art.

The Rubin Museum and its Program Director, Tim McHenry (who served as the event's emcee), are to be commended for bringing such an event to the streets of New York City. The large-sized audience watching the whirling and twirling of the Bhutanese dancers had people who knew where Bhutan was, some wore Buddhist bracelets or fingered prayer beads, and a few photographers who seemed they had seen such dances before.

Despite it all, and at the risk of sounding churlish, I sensed that the Cham dances against the backdrop of modern glass-fronted buildings and yellow cabs didn't fully work. The full impact of the dances really comes to life in their natural 'habitat'...the authenticity of ancient monasteries, the age-worn cobblestones, the shy Bhutanese villagers as audience, are what completes the Tchechus and such dances.

The above photograph of a masked dancer is one of the many I made during the hour-long performance.
Posted by bella at 5:25 AM