Since the weather has been changing, I decided to document another weekend trip, so you can see some of the changes in my gear. This happened to be a very rainy weekend, which made the trip more interesting.

I started out Saturday morning. It was raining, although not heavily, and the temperature was around 40F (5C). Shortly after I started walking however, the rain stopped. It remained foggy and wet for the rest of the weekend, with some sporadic rain fall, but it wasn’t as rainy as I had anticipated. 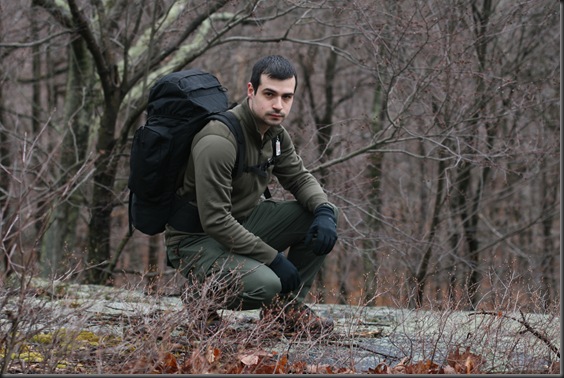 About half an hour into the trip, I had an accident, where I slipped and fell while climbing a rock in order to take some pictures for you guys. I ended up taking off quite a bit of skin off my right forearm, and bruised my hands. Interestingly, I managed to scrape my skin through the fleece top you see in the picture above, without causing any damage to the top. The picture was taken shortly after the fall.

The really bad part was that I broke my cameral lens in the fall. The silver lining was that none of the glass parts broke, but it would no longer focus accept at the distance on which I had it set before. I was able to take some pictures with it during the trip, but you will notice, there are no close ups of smaller objects. That is because I could not focus the lens.

My gear for this trip was very similar to what I listed for the 2/18/12 trip. You can see the detailed list here. There were several changes however.

Because of the smaller bag, I was able to take a smaller pack. Instead of my CFP 90, which weighs 5lb 2.6oz, I brought my Rio Grande 45L pack, which weighs 2lb 9oz. This gave me additional weight savings of 2lb 9.6oz.

I also used a smaller fuel bottle for my stove. I brought the 11oz bottle instead of the 22oz bottle. The small bottle weighs 2.8oz, which reduces the bottle weight by 4.3 oz. It also reduces the fuel weight (less fuel) by 6.3oz.

I did bring one extra item however. My father has apparently been very worried about me bushwhacking for extended periods of time, so he got me a GPS, which was very nice of him. I am still trying to figure out exactly how to use it, but together with the batteries, it added 5.4oz to my pack weight.

All the gear stuff aside, I got on my way. This wasn’t going to be a long trip in terms of distance, about six miles overall, but the change in elevation was very quick and frequent. I was planning on reaching several peaks during the trip. After several hours I reached my first destination. 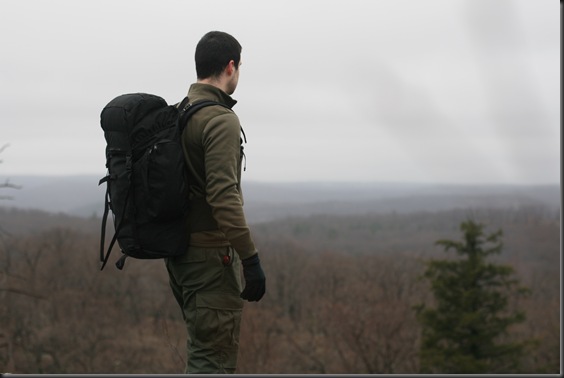 You’ll probably also notice that I am not wearing the wool clothing in which you have seen me this past winter. For this tip I wore my usual clothing, which is mostly composed of fleece. Considering that I was expecting rain the whole weekend, fleece was the better option.The pants you see above are just polycotton cargo pants. The top is a Carhartt medium weight top (size M), over a synthetic t-shirt. The gloves are EMS liner gloves.

After a little more climbing, I stopped for lunch. 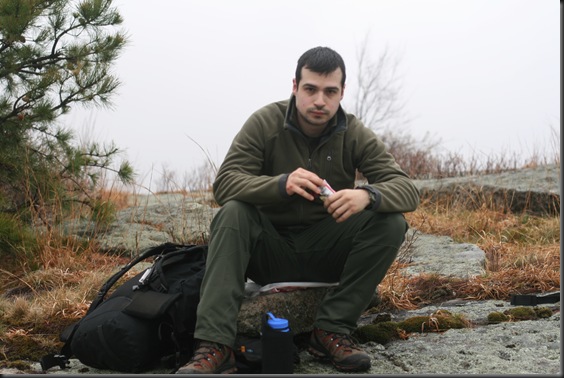 As you see, I have put on another layer of clothing. It is a REI Windstopper fleece shirt. It is hardened fleece, meaning it has a membrane which blocks the wind, but not moisture. It is rated for up to 50 mph winds.

I also had my rain jacket and a pair of rain pants, i.e. a pair of nylon running pants I got at Target. Most of the time they just stayed in the top pocket of my pack.

Around 5pm I made it to an area where I could set up camp. I found a nice area between two small hills. A lot of the rain water had collected in parts of the valley, but it’s too cold for mosquitoes, so I wasn’t worried about it. It was nice to be so close to a water source.

I set up camp, made fire, and started cooking dinner. Oh No! Is that fleece I am wearing next to the fire?! Yes it is. I find the claims of synthetic materials combusting or melting from sparks extremely exaggerated-just don’t roll around in the fire and you’ll be fine. 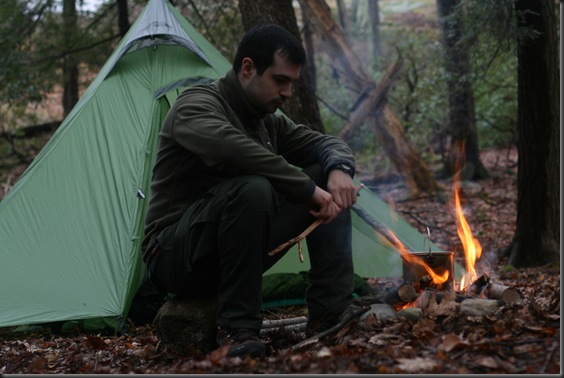 It was very hard to maintain a small fire. All of the wood was completely soaked. It didn’t matter if it was standing dead wood, split wood, or any other variant. I was lucky that this one particular spot had both pine and birch, both of which burn readily. If I was in a typical oak and hickory area, I might have just stuck to using my stove. You can see in the picture above that I am drying out wood by the fire as I cook. The big downside to using birch is that it covers the pot with a lot of pitch. It was very hard to clean up, even though I was next to a water source.

It became completely dark around 8pm, so I went to sleep. I kept both my fleece tops on in the sleeping bag. That, together with my Neo Air Four Season pad kept we warm, even though I was using the sleeping bag at its limit. It is a 30F bag, and the temperature got into the low to mid 30s during the night.

I had a hard time sleeping because of the pain in my arm from the earlier fall, so when the sun came up around 6am, I got up. It was quite cold. I started a small fire just to warm up and heat up some water for oatmeal. 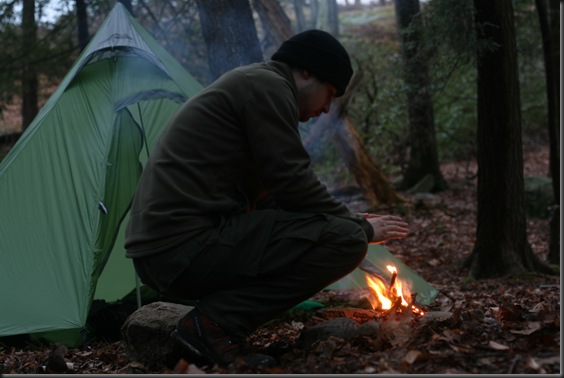 After eating I spent some time by the fire and warmed up. Around 10am I packed up camp. Before leaving, I had to refill on water.

When I say that I was next to a water source, you should imagine something along the lines of a puddle or small swamp. Unfortunately, because of the extremely rocky composition of the terrain, most water runs off very quickly, so small sources in swampy areas are the common source for water. Here you can see me scooping some of it up into a water bladder before filtering. I have gotten fairly good at it, and can fill up the 1L bottle in under a minute with this method. 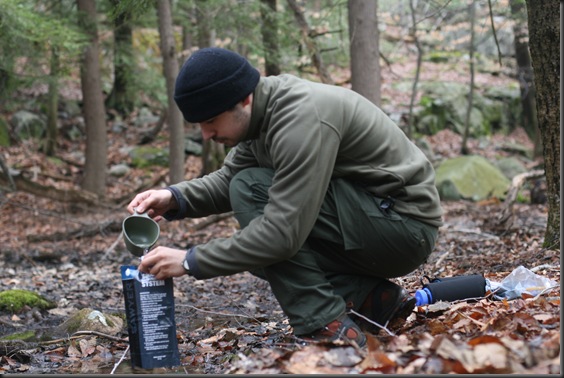 I was very happy with the way the Sawyer Squeeze filter performed. At no point did it feel like a burden to use it. I was using it with the pre-filter I talked about in an earlier post, which did very well at removing the larger particles. 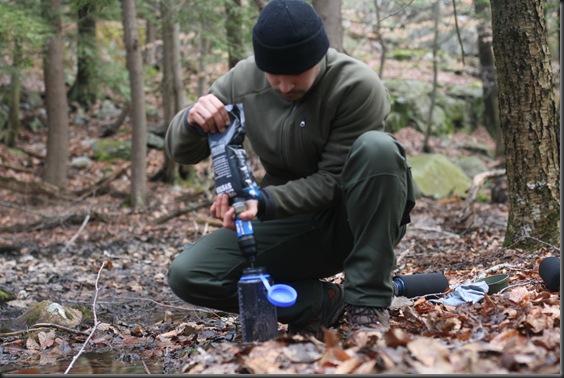 As a side note, the back flush adapter I spoke about here, does a great job when filling up a Platypus bladder. Simply hook it up as if though you will back flush the filter, but then just start filtering the regular way. The filter will be connected tot he bladder, freeing up your hands.

The rest of the day was spent reaching another peak, with a small stop for lunch. From the pictures you can see that most of the peaks are above tree line. That is not a function of elevation, as none of these mountains are particularly high. Instead, it is a function of the soil composition. The mountains are mostly rock, with a very thin layer of soil. At the peaks most of it has been washed away, so trees have a very hard time growing there. 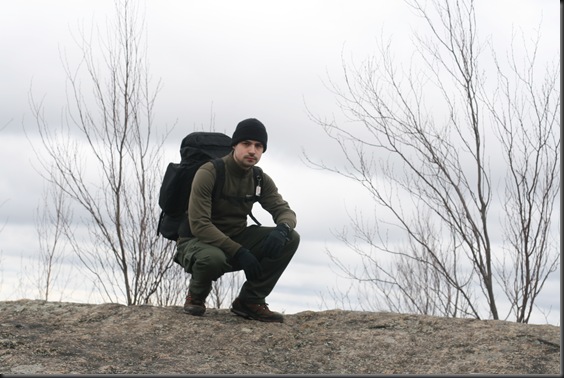 After that, it was back to the car. Like I said before, the trip was not particularly long in terms of distance, but the constant elevation changes made it a somewhat difficult one. The wet weather did not help.

An added benefit of the GPS is that after a bit of playing around, I was able to get a map of my trip. In fact, that was it’s primary use during the weekend. 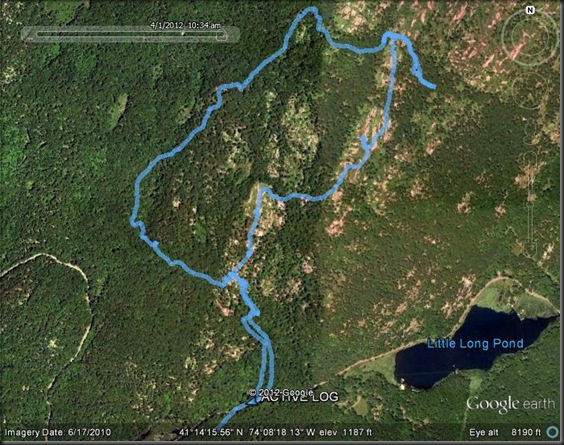 As you can see, a lot of it follows ridge lines, hitting several peaks (the non green areas). The line off the loop that you see on top is the area where I set up camp for the night.

That’s it. Short trip; not much else to report.