POV: What Worked What Didn't. The Oracles of Kerala Photo Expedition-Workshop 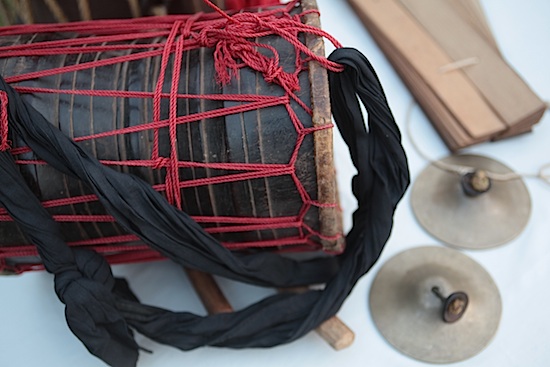 As a prelude to what equipment worked for me and what didn't on The Oracles of Kerala Photo Expedition-Workshop, I thought I'd put up two photographs of the musical gear used by the traditional puppeteers. One was made with the Canon 5D Mark II and the other with a Leica M9. These are both jpegs out of the cameras with no post processing except for the same amount of sharpening.

So what's your vote?

UPDATE: For The Correct Answer, Check It Out On My FB Page.

Here's what worked for me on The Oracles of Kerala Photo Expedition-Workshop and what didn't. The list of my equipment was as follows:

For audio, I had a Tascam DR-40 Recorder, an Audio-Technica ATR6250 Stereo Condenser Video/Recording Microphone and Sony headphones.

What worked for me and what didn't on this trip:

1) Both the Canon 5D Mark II and the 7D were used 90% of the time, especially during the festivals when capturing the action, sometimes in less than ideal lighting conditions, was needed.

This is part of my evolution as a photographer. I started out (as some do) by using the 70-200 mm as my primary lens wherever I went. Eventually, my lenses got shorter, and my current favorite is the 17-40mm. At some point, I'll probably get the 16-35mm f2.8mm which is a great lens.

3) The M9, and its 2 lenses, was used whenever I sought to make environmental portraits, or when I had the time to compose and focus properly. In low light, it would have been close to useless, and during the frenetic action of the festivals (especially of the Oracles), I might have missed many shots had I used it.

4) I didn't use the prime 24mm f1.4 at all on this trip, and used the flash for only a few shots of the Peacock dance. Other than that, it stayed in my room.

5) I liked my new Tascam DR-40 Recorder. It performed well and the quality of it recordings were satisfactory. That said, I really needed a "dead cat" to reduce wind noise, especially when I was recording on the beaches of Kerala where there was wind.

6) Both Audacity and Soundslides were used during classwork, and both worked flawlessly as they should.
Posted by bella at 2:00 AM