This product has been around for a some time now, although I only got mine recently. I had a reader request this review, so here it is: 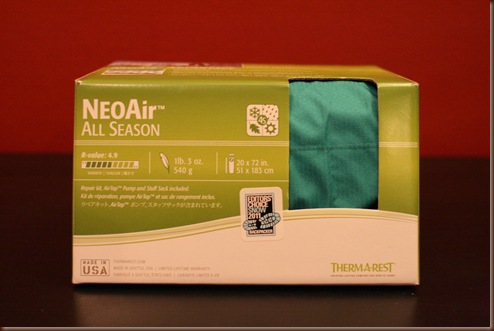 As you guys know, the sleeping set up for most people in the woods involves a system. The main component is usually a sleeping bag, with some type of rain protection on top. Under the sleeping bag you usually find a pad. The reason for that is that heat can be lost very easily through contact with the ground; in many cases faster than with air. Also, sleeping bags get more compressed on the bottom due to the weight of your body, losing some of their insulation.

Not all sleeping pads are made equal. They differ in design, from inflatable pads like the one in this review, to closed cell foam solid pads. The main difference however is in the insulation, or R-value of the pad. It is generally said that an R-value of over 3 can be considered a “winter” pad. I’m not sure how accurate that is, but the higher the R-Value, the better the insulation.

For reference, your standard army surplus closed cell foam pad, that you roll up and attach to your backpack, has an R-value of about 2. This is more or less the same with most closed cell foam pads on the market, as well as many of the regular inflatable pads. Traditionally, in winter, people would carry two of these pads.

In recent years, developers have started to come up with inflatable pads that have higher R-value. Some use insulation such as down inside the pad, others, like the NeoAir All Season use heat reflective materials.

The first thing to note is that the listed weight for the pad is 1 lb 3 oz. Mine came out to 0.9 oz heavier. I have used it a bunch of times, so this could be due to condensation inside the pad, but seems unlikely.

Speaking of condensation, when it comes to inflatable pads, this is one of the largest issues when used during winter. If you inflate it by blowing into it, moisture from your breath will condense inside. If your pad uses something like down insulation, the R-value of the pad can get decreased significantly.

Because of that, most inflatable pads come with a pump of some sort. Typically, the stuff sack will act as a pump. The same is true with the NeoAir All Season. The stuff sack attaches to the opening on the pad. You then let it fill up with air, and squeeze the air into the pad. 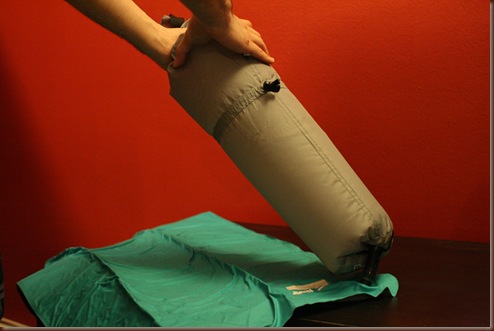 I have given this method a fair try, but in my opinion, it does not work at all. Well, to be exact, it works, it just takes FOREVER. I am yet to manage to inflate the pad using the pump. In fact, I cut out the extra parts and now just use it as a stuff sack. I inflate the pad the old fashioned way, by blowing into it.

Condensation is not as big of an issue for the NeoAir All Season because it does not use any insulation which would be effected by the moisture. Instead, it seems to use a honeycomb of some material that looks like a space blanket. 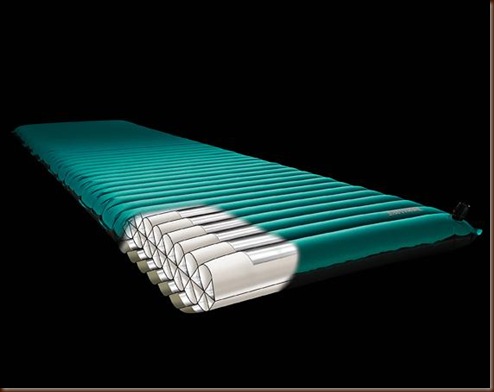 Because of that, even when fully deflated, the NeoAir All Season has an R-value of about 1.5.

I resisted getting an inflatable pad for a long time because I was worried about punctures. I figured, it weighs as much as a closed cell foam pad, it has the same R-value, as most three season inflatable pads have an R-value of about 2, and they cost a lot. With this one however, there is a clear benefit. An R-value of 4.9 is a significant increase in performance, and the added thickness makes for a very comfortable pad. This for me outweighs the added danger of puncture. The pad also comes with a very light repair kit. I am not sure how well it works.

It packs up very small. They say it is about the size of a Nalgene bottle. You could pack it up that small, but a more realistic size is what you see in the picture. This also happens to be the size of the stuff sack. 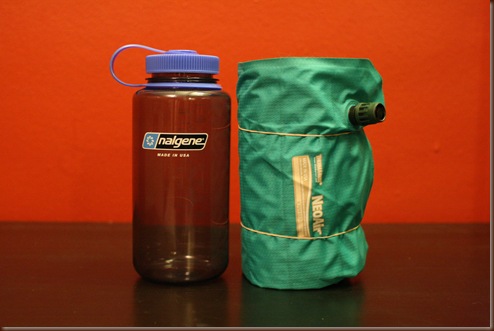 My experience with the pad has been very positive. The first time I used it, I could immediately feel the difference when compared to my closed cell foam pad. I have been able to really push the performance of my sleeping bags because of this pad. It is also much more comfortable. The sleeping site requires a lot less preparation, as you are well protected from rocks and branches.

The pad also feels thick and durable. It also seems to do well at distributing the air inside. That way, when you sit on it, it does not compress under you, sending the air to another area of the mat. 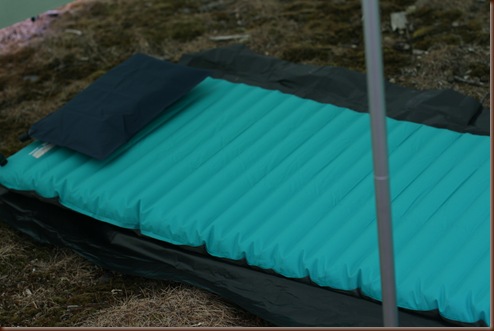 The only down side is its size. When inflated it is fairly narrow. It is just long enough to fit me, and I am about 6 feet tall. When you are moving around during the night, you have to be careful not to slip off. As you can see from the above picture, I use a trash bag as a ground sheet. I do that so that when the sleeping bag hangs over the sides of the pad, it doesn’t touch the ground.

Overall, I am very happy with the pad. I am not big on testing pads, so I am not sure how it compares to some of the other top of the line models, but for my uses, it has been perfect. It has made a big difference in my comfort level when out in the woods. It has also been great not to have a pad on the outside of my bag, catching all the branches.