On Friday you saw me review the Sawyer Squeeze Filtration System. While the extremely low weight can make up for certain deficiencies, such as speed, there were two problems, which I thought needed to be addressed before using the filter.

The first problem was the lack of a pre-filter. In my experience, hollow fiber filters are not easy to clean, and because of that, a pre-filter can go a long way. The second problem was the cleaning, or back flushing system, i.e. the huge syringe. There just has to be a better method.

Here are some of the modifications that I have done to address those two problems. 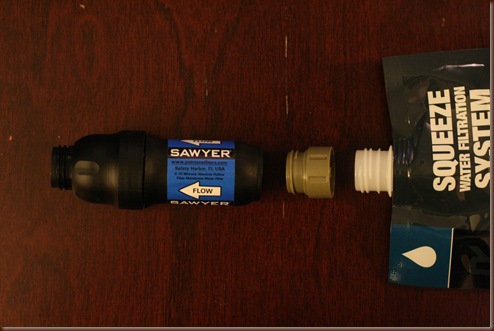 One thing I noticed about the pre-filter is that it had a very narrow opening, clearly designed for a hose connection. When I tested the Sawyer Squeeze Filtration System with the pre-filter, the time to filter 1L of water went up by almost 30 seconds. It’s not a huge deal, but I figured I could modify the pre-filter in the hopes of speeding up the process. Here is what it looked like originally: 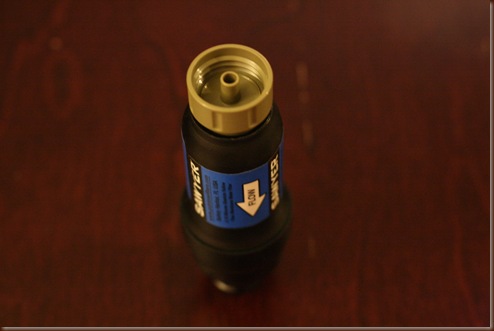 I used a knife to enlarge the opening. The plastic is soft, so it was easy to do. I figured that the larger opening will allow water to flow more freely. Unfortunately, the modification did not increase the flow speed noticeably. With the pre-filter, it still takes me about 3 min to filter 1L of water. I think the decrease of speed is well worth it. After each time I have used it, the pre-filter has caught a large amount of debris, which would have significantly shortened the life of the Sawyer filter.

You can make a similar pre-filter from a soda bottle. You just need the cap and the part of the bottle to which the cap screws on. Simply make a hole in the cap, epoxy it to the cut off part of the bottle with the threads, and fill it with a coffee filter or some other material. You just need a male thread to screw into the Sawyer, and a female thread into which the bottle can go. Stuff the empty space with the material of your choosing, and you have a pre-filter.

Like I mentioned earlier, there is no way I am carrying the syringe around to clean the filter. After looking at it further, I decided that there is nothing special about it. You just put the syringe next to the opening of the filter and push the water through. There is nothing to screw on, and there is no special attachment mechanism. So I thought, why not just use the water bladder as a syringe? All I would need is a modification of the cap that looks like a syringe. After some thinking, I came up with what I think is a slightly better method.

I took the cap from the water bladder and a piece of tubing (the same diameter used by the MSR Miniworks EX or most other filter). 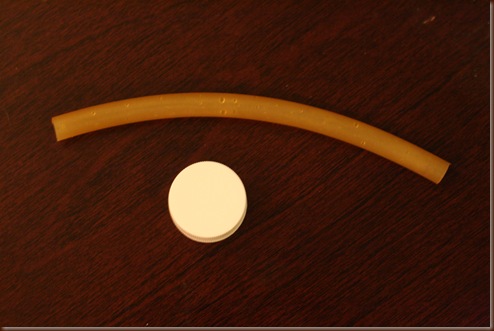 I drilled a hole in the cap and epoxied the tube in it. 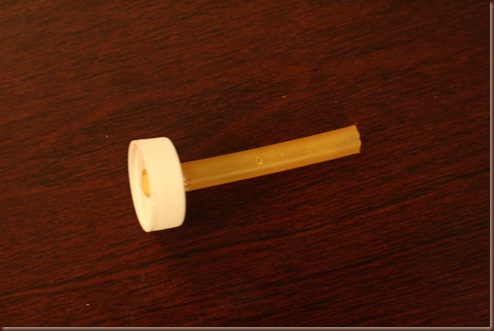 To use it, just screw the cap onto a bladder with clean water. Then attach the tube onto the nozzle of the Sawyer filter where the water ordinarily comes out of, and squeeze to fore the water into the filter, back flushing it. 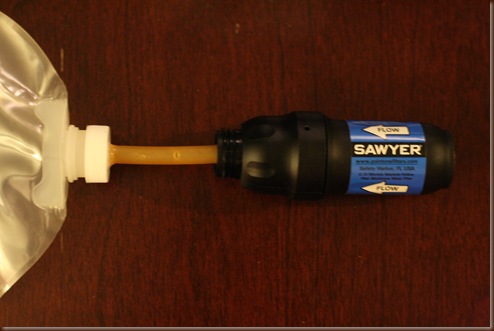 Another good way to do this is to use the cap and hose from a bladder system. It is in effect already made for you, as it is just a cap with a hose attached to it. Cut the hose to length and stick it into the Sawyer.

I have now used the Sawyer Squeeze Filtration System several times in the field, and so far I am very happy with it. The above modifications give me a bit more peace of mind when I leave my trusted MSR Miniworks EX behind.