The Oracles Of Kodungallur

The Oracles of Kodungallur celebrate their festival in the Bhagawati temple, which usually occurs between the months of March and April. It involves sacrifice of cocks and shedding of the Oracles own blood, to appease the goddess Kali and her demons who are said to relish blood offerings.

"It was one of the most intense photographic experience I've had in a long while."

The festival is overseen by the aging King of Kodungallur where hordes of Oracles (Vellichapads in local Malayalam) stampede around the temple waving their curved swords while chanting abuse at the goddess.

This 4 minutes movie (using SoundSlides for the still photographs and Audacity to edit its audio, and then converted to a movie file) was made of material gathered during my The Oracles of Kerala Photo Expedition/Workshop™. I struggled with putting its audio all together, and it's still far from perfect, and I intend to refine it in weeks to come, but it will do the time being.

It was one of the most intense photographic experience I've had in a long while, even surpassing the intensity of the Maha Kumbh Mela in 2001. The seeming abandon with which the Oracles injured themselves by repeatedly striking their foreheads with their swords was disturbing at first but, in due time, I realized that their companions made sure that it didn't go too far, and took care that in the heat of their trances, the Oracles didn't injure anyone else.

Not for the fainthearted, it was also a draining experience over two long days for all the participants in my workshop, and I admired the women in our group who immersed themselves in photographing and documenting this event...not an easy task in view of the density and raucousness of the crowds. We returned every night to our hotel, exhausted, filthy, sweaty, thirsty and covered with turmeric powder...but exhilarated by what we saw and photographed. 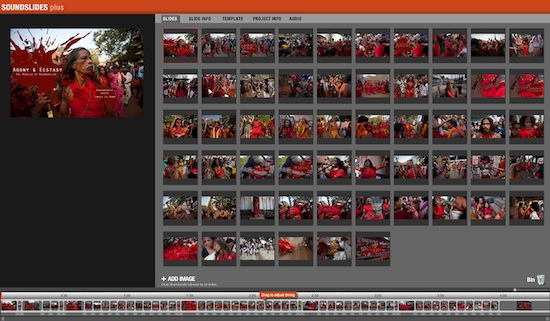 And that's the image of the SoundSlides' interface. I print and use it as a scratchpad/storyboard...jotting down timings etc.
Posted by bella at 2:08 AM