For the past few weeks I have been working on a series of post about creating a reasonably priced beginner three season camping/bushcraft kit. This past weekend I had scheduled a trip into the woods where I was going to show how you can use that three season gear for a standard overnight trip. Unfortunately, the weather had different plans. Here in the Northeast we got hit with a snow storm. So, I had to change plans, and instead decided to put my new shelter, the GoLite Shangri-La 5 (Flysheet) to a more serious test.

I managed to get to the mountain, but once I entered the park, the car couldn’t go far and got stuck quickly. At that point (not because of my car), NY and NJ declared a state of emergency because the snowfall was heavier than expected. In particular, there were a lot of trees down, some of which I encountered on the highway on the way there. The upside was that there was no one in the mountains. I left the car and proceeded on foot. 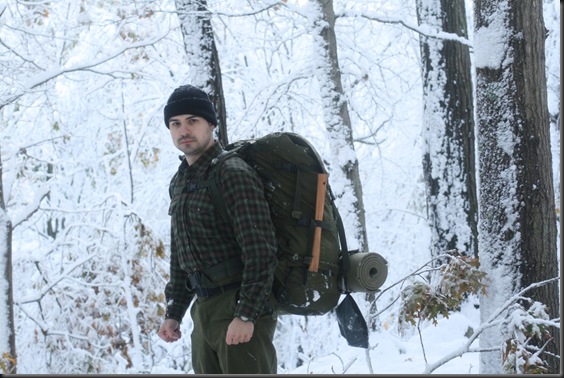 The axe you see on the side of my pack is an early prototype of the 2012 Condor small axe which I have been testing. I was able to get it thanks to Joe from Woods Monkey.

The snow was coming down hard, and it had taken me so long to get there on the unplowed roads, that the sun was going to go down in about two hours. So, I picked a camp site, and set up the shelter. If you look closely, you’ll see my dog making himself comfortable on my sleeping bag. 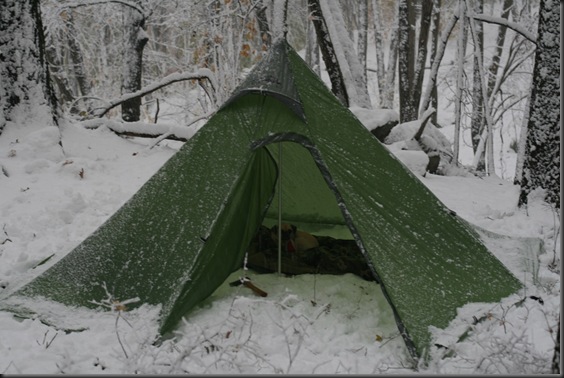 Using the GoLite Shangri-La 5 was a big improvement over the tarp. I had gotten it specifically because the tarp was giving me problem during winter camping. While it was fine while I was sleeping, for the rest of the time, there was no protection from the wind, which made things difficult. The GoLite Shangri-La 5 performed very well in that respect. Also, since it is a floorless design, it allowed me to do much of the thing I would do when camping with a tarp. Here you can see me cooking inside the shelter on my MSR Whisperlite International. 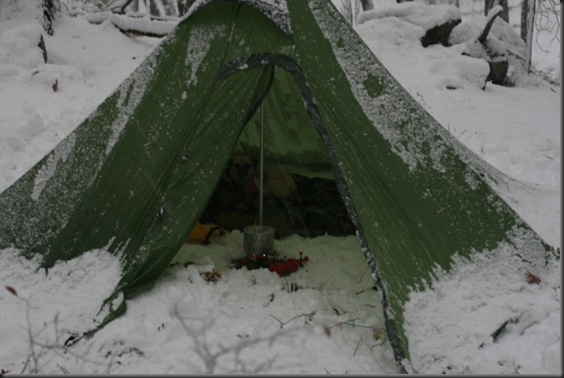 During the night there was a lot of condensation inside the shelter. The snow quickly burred the openings on the bottom of the shelter, so ventilation was out of the picture. Fortunately, though, since this is a floorless shelter, it wasn’t much of an issue. The condensation either froze on the walls of the shelter or dripped down to the ground.

Another feature of the shelter for which I was thankful was that the door can be opened from the top as well as the bottom. By the time the sun came up, there was no way for me to reach the bottom zipper. What you see in the picture here is the shelter buried half way up by the snow that came over the night. 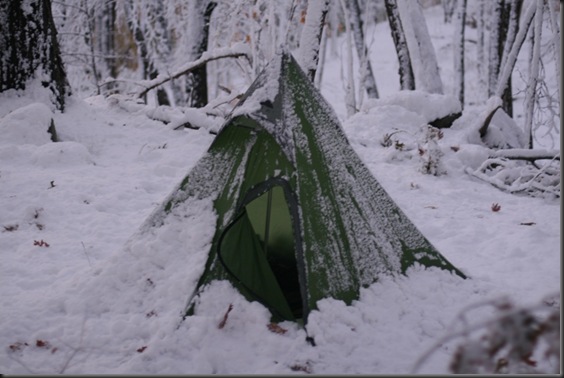 Despite the heavy snow fall, the GoLite Shangri-La 5 held up well. During the night I could feel it shrinking due to the weight of the snow, but it did not fail in any way. Overall, I was very happy with the design, and with my switch to this type of shelter.