From time to time you have seen me mention certain DIY alcohol stoves. They are a good cheap way to have a stove in the bush without having to look at commercially available options. The one in this post, is one of the simplest stoves to both make and operate. It came out about 2007-2008 and since then has gained great popularity because of those characteristics.

All you will need for the project is one 3oz aluminum cat food can. It seems that all of the cat food cans that come in that size are about the same in shape and size. You will know it is aluminum as oppose to steel because it usually says it on the label for recycling purposes. It is preferable to get the aluminum cans because they heat up faster and weigh slightly less. 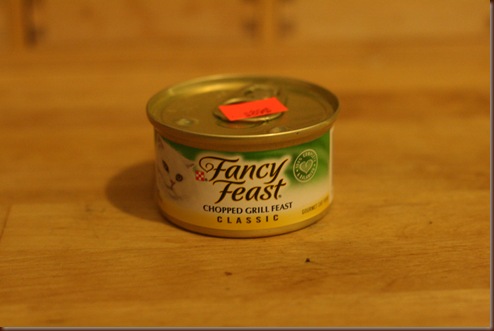 As far as tools, you will need some way to make holes. A drill with a quarter inch bit will work just fine, but since this is a thin aluminum can, a regular hole punch that you buy at Staples will work great as well.

The begin, open the can and empty it out. 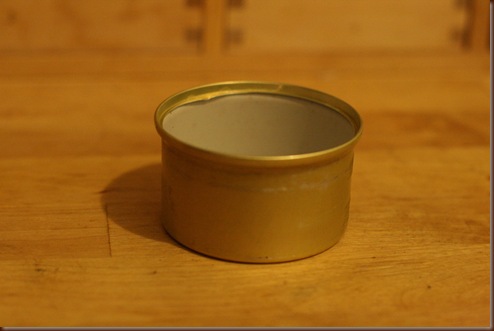 Then, along the side of the can, measure out and make marks about every half an inch. Using these marks to align the center of each hole, punch out a row of holes right under the rim on the can (in the area where the walls of the can straighten out). 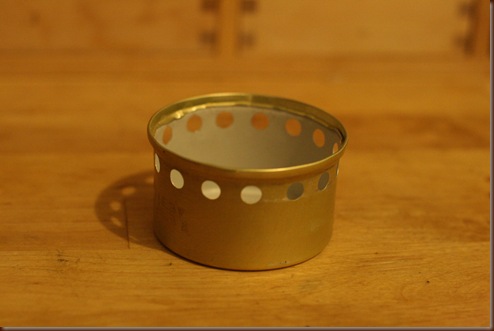 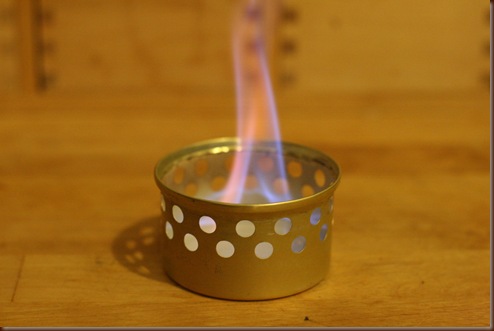 When complete, put some alcohol in the stove and light it up. Allow the alcohol to burn for about 30 seconds, to preheat the stove. At that point you can place the pot directly on the stove without any pot supports. The flames should now start to come out from the holes, creating a self contained stove/pot holder unit. 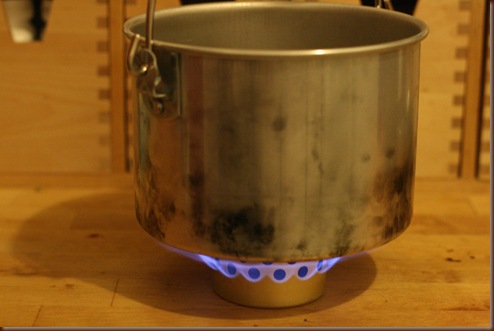 The project requires about 10 minutes and the only needed materials are the 3oz can and a hole punch. 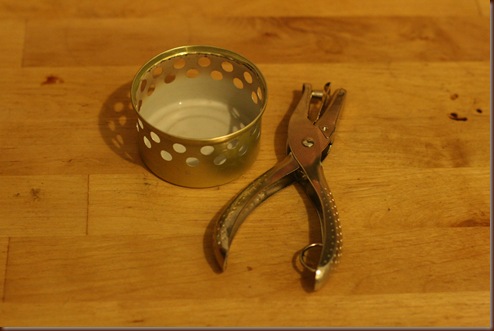 The stove boils two cups of water at the seven (7) minute mark after it is ignited. What that means is that considering that it took 30 seconds to prime the stove, the two cups of water were brought to a boil in 6.5 minutes after the pot was placed on the stove. One ounce of alcohol lasted for a little over nine (9) minutes. There are many great websites out there which can show you in more detail how adjusting the holes can alter the performance of the stove.

The biggest downside of this stove for me is that it can hold only one (1) ounce of alcohol at a time. I usually like my stoves to be able to hold at least two, so that I can cook more complex things without having to refill. However, considering that the stove only weighs 0.2oz, it is a price I a willing to pay.