The Development of the American Felling Axe

In this post I want to provide a brief overview of what is generally considered an American pattern axe as opposed to a European pattern. These days the area of production has nothing to do with whether an axe is a European or American patter. It is more of a distinction to be found in history. 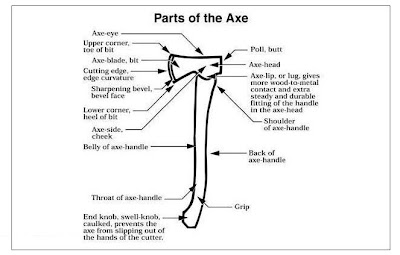 European pattern axes were exemplified by axes from the 16th and 17th century, both in Europe and colonial America. These patterns featured a round or elliptical handle, and a correspondingly round or elliptical eye on the axe head. These axes had no poll, and the transition between the cheeks of the axe and the eye of the axe was very abrupt. In effect, you had a narrow blade, which ended at a circular hafting point. As a consequence, in order to keep the eye from contacting the wood being chopped, the bit of the axe was elongated. Here you can see a good example of this early axe design along with the manufacturing process. 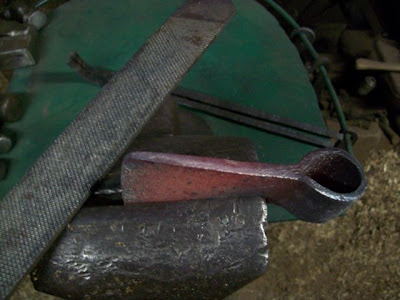 Starting in the 18th century, developments occurred in axe design in America, which resulted in what has come to be called the American pattern felling axe. The first development was the introduction of a poll to the axe. At first the poll was just a squared off area at the back of the axe, which made it easier to use as a hammer, but eventually, more weight was added to the poll, improving the balance of the axe. The second development was the flattening out of the sides of the axe head. This flattening turned the eye from an elliptical one to a triangular one. It also provided for a smooth transition between the cheeks and the eye of the axe, creating a smooth, continuous surface on each side of the axe head. This improved the penetrating and particularly splitting ability of the axe. 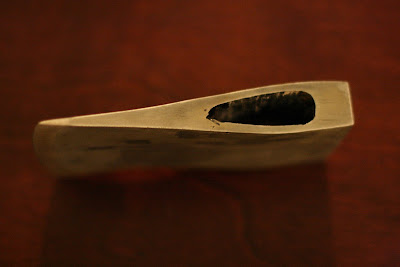 There are other distinction when it comes to types of iron and steel used, and different techniques for making the axe head, but I will not go into them here because they do not alter the pattern of each axe.

These days, virtually all axes that are not made for historical recreation purposes are American style axes, even if made in Europe. For example, the pattern which we see in the Gransfors Bruks axes from Sweden are actually a Rockaway pattern, popularized by the William McKinnon Axe Factory of Rockaway in NJ.

Issues of the thickness of the bit, or specific head designs, have little to do with what defines an American pattern axe. During the golden ages of axe manufacturing, there were hundreds of axe designs in the US alone, all of them variation of the American pattern felling axe.
Posted by bella at 4:20 AM