Removing an Axe Handle in the Woods

Back in March I did a post about making a replacement handle for an axe in the woods. You can see the post here. Inevitably, the question was brought up about how to remove a broken off handle if part of it is still securely attached to the head. The method I recommended was to use an amber to burn out the wood in the eye, just like you would a spoon. Unfortunately, this is a time consuming method. An easier approach was recommended, where the head of the axe is placed in a fire and the handle burnt out. I was skeptical about this approach because if the axe head is overheated, the temper of the blade can be ruined. I figured however that I would give it a try, and see if it works. I followed the approach outlined by Kephart in Camping and Woodcraft.

I started out with an old Colling hatchet. The head was securely attached to the handle. 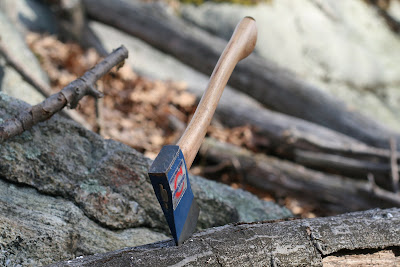 I buried the head of the hatchet up to the eye in the soil. 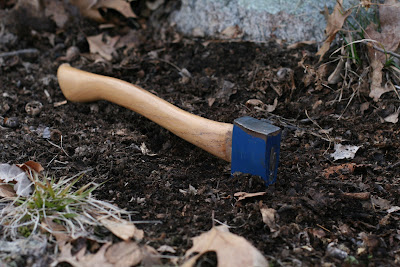 I then built a fire on top of it. The fire was large enough to cover the head. The wood used was oak. I continued the burn for 15 minutes. 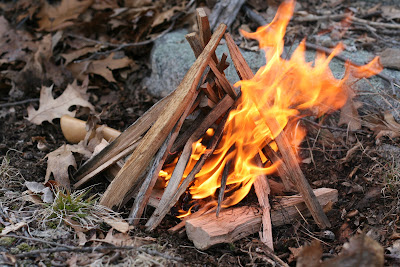 I then pulled the head out of the fire. The handle had burnt off, but surprisingly, the head appeared untouched by the fire in the areas that were buried. 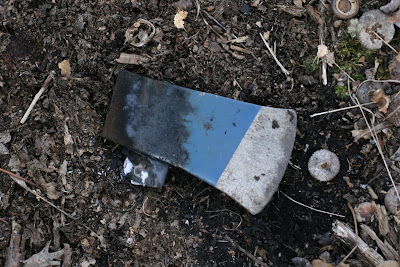 I used a piece of split wood that I had left from making the fire, and with the help of a baton, I pushed the handle through the eye from the bottom. As you can see, the area on top of the eye was not too charred, ut the bottom part had been burnt much more severely. To punch out the part of the handle in the eye, just prop one end of the head on the ground, and the other end on a log. That should create enough free space under the eye for you to push it out. 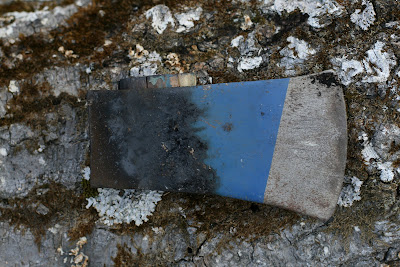 With very little effort, the head of the axe was free from the handle. 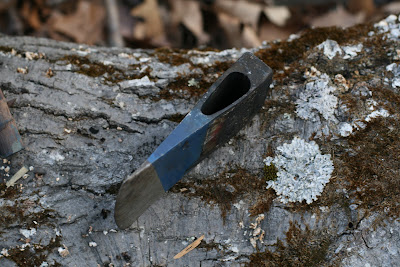 When I returned home, I sanded off some of the paint/protective cover, and put the head in vinegar. What that does is to reveal the temper line of the axe head. Here it is clearly visible, and seems unchanged. At the very least, there are no areas where you can see that high heat advanced and changed the temper. It is possible that the temper was uniformly changed throughout the head, retaining the temper line, but I hav eno way of testing for that. 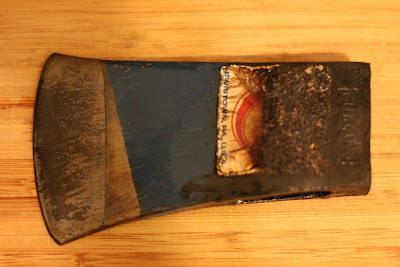 I was shocked by how little the head was effected by the fire. Most of it retained its original paint, and even the rust appeared to be untouched. While the head got hot, it never even came close to being hot enough for the temper to be substantially effected. Even the poll of the axe, which was directly exposed to the flame, never got red hot. Despite my scepticism, this appears to be a very effective way to remove an axe handle while in the woods.
Posted by bella at 4:54 AM