The Hultafors GK is another Scandinavian knife that has seen some popularity in recent months. There is a good amount of material on its lighter weight cousin the Hultafors HVK, including some destruction tests, which show it to be a robust blade. I wanted to give you some comparison pictures, so you can see how it stacks up against some of the knives with which we are more familiar. 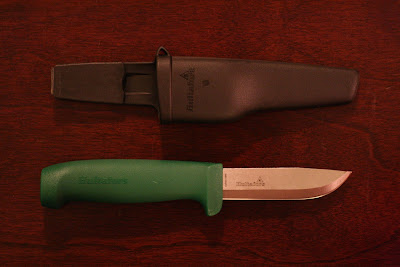 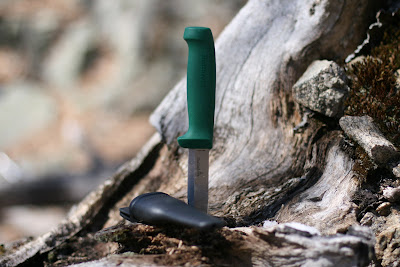 The knife is cheap. It is in the same cost category as the old school Mora knives. Even though I had to get it shipped from the UK, the overall cost was under $20. You can find the knife here.

When compared to the Mora 1, the Hultafors GK is a much more robust knife. While the blade is a little bit shorter, it is noticeably thicker and wider. The curve at the tip of the blade on the GK is more pronounced than that of the Mora, which I find shortens the working surface of the blade, making the GK feel like a shorter knife. The blade has a small secondary bevel, again, making it more robust that the Mora. The handle is very large when compared to the Mora 1. I am sure that some people will like that, but I find it to be unnecessary bulk. The handle also has a very poorly positioned finger guard. It is or noticeable size, and on top of that is rather thick. This makes the knife uncomfortable to use in a number of positions. If I had any interest in using the knife, I would have to grind it down. 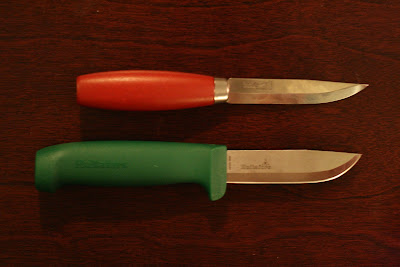 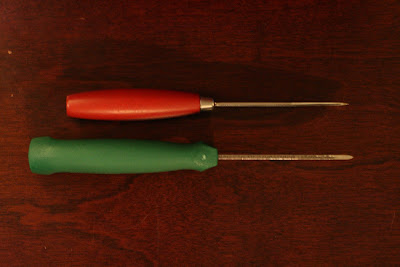 The knife has a concealed partial tang. Here you can see a picture of it. The picture was not taken by me. The connection between the blade and the handle felt very secure, and I did not feel any movement at any point during testing. 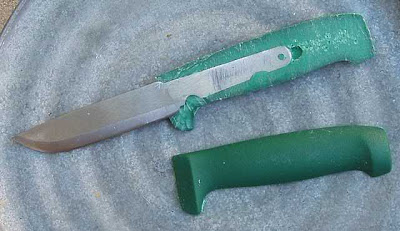 Just like with all other knives, I took it out for some testing. I put it through some of the regular tasks for which it might be used.

The knife did well with batoning. The blade is of course very short, coming in at under four inches. This significantly limits the size of wood which you will be able to split. The relatively thick blade had no problem going through the wood. 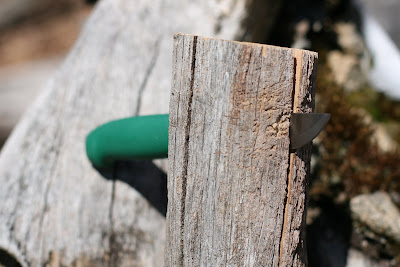 Similarly, when truncating, the knife is robust enough to take the pounding without much fear of it falling apart. 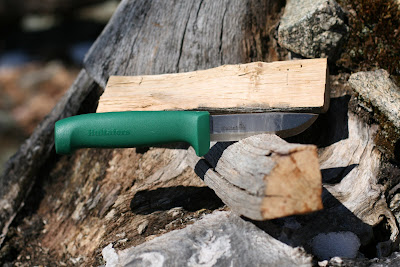 As with any sharp knife the feather sticks were not a problem, although the finger guard made some of the process harder by not allowing me to choke up on the blade. As I mentioned above, I find this to be a big problem with a knife which will do a good amount of wood working. 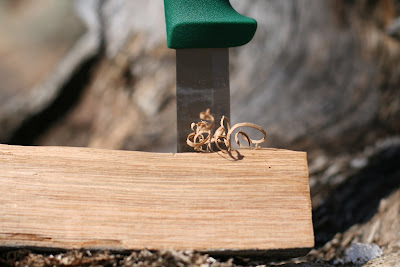 The knife comes with a good quality plastic sheath. The knife is held securely inside, although it feels somewhat bulky.

I think that overall, this has been my problem with the whole knife. It is just too robust for what it is. I find the blade to be too thick and wide considering that it is so short. The short length limits much of the force that you will b able to put on the blade, and as such, there is no need for it to be nearly as thick or wide. Unless you plan on using it to split concrete, it is a bit of overkill. I am sure that since it is intended to be a utility knife, that may very well be the intended use, but as a bushcraft knife, the added bulk when compared to the Mora 1 seems unnecessary. Similarly, I find the handle to be way too big. I am sure that there are guys out there with large hands who will live the handle, but for my average size hands, most of the handle did not see much use.

Overall, I find this knife hard to recommend over the usual Mora knives. The price is about the same, but I would rather have a Mora 1, or even a Mora Clipper instead of Hultafors GK as a bushcraft knife. There is a certain simplicity and bare practicality to the old school Mora knives, which is missing in the GK. Granted, this is intended to be a heavier work knife. The lighter HVK model will probably be better suited for bushcraft tasks.
Posted by bella at 5:03 AM