POV: The Gulf Between Us? 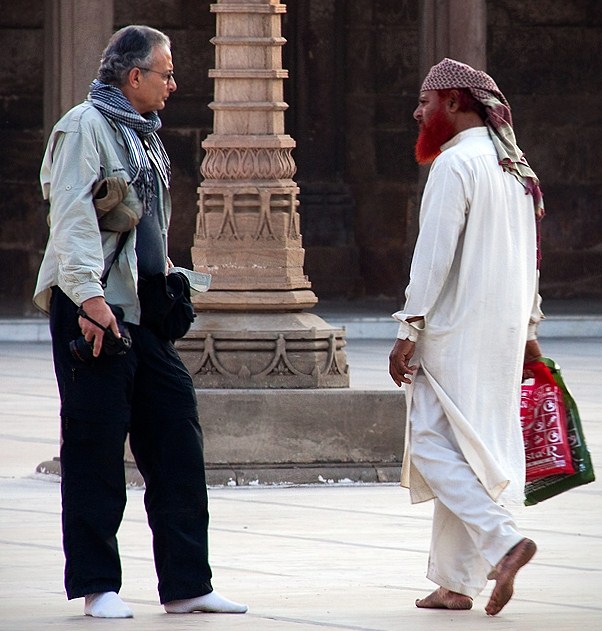 Photo © Charlotte Rush-Bailey -All Rights Reserved
Oh, how our eyes can deceive us sometimes..and how easily photographs captured in a split-second can convey a very different story from reality.

Here's a photograph of me while at the Jama Masjid in Ahmedabad during prayers (called namaz in India), in which I look wary of the man who's crossing my path. Our body language and side glances seem to convey a mutual distrust, with the space between us accentuating that wariness.

But nothing could be further from the truth. A second later I greeted him with the traditional Muslim al-salam aleikum, unmistakably pronounced in Arabic. Surprised, his face immediately softened as he recognized a fellow Muslim, and he responded, with warmth in his voice. We shook hands, then he brought his hand to his heart, and I did the same. I forget his name, but I remember his kind eyes, and that he spoke a halting Arabic (which he later told me he learned while working long and hard hours in Jeddah). He suddenly asked me if I was Sunni. The question threw me off-balance for a moment, but when I replied affirmatively, he once again violently pumped my hand. I was now part of the Umah. If only he knew what my real beliefs were. Perhaps he wouldn't care...to him, the bottom line is that a Muslim born in the faith is always a Muslim, no matter what.

During The Tribes of Rajasthan & Gujarat Photo~Expedition, we visited many villages and a number of tribes of Muslim persuasion. We were frequently asked where we were from, and were greeted with smiles when we replied "Amereeka". Despite obvious poverty, we were welcomed in homes, offered fresh milk, chai and roti , and were considered honored visitors. I wonder how we -in "Amereeka"- would treat these villagers if they dropped by our homes...just like that, to take pictures and to gawk. No, that's not true. I don't wonder. I know.

These are the memories which stay with me for a long time...memories of instances when the walls of mistrust, ignorance and bigotry (on both sides) dissolve because a genuine -and basic- human connection is made. These memories remain with me more so than my photographs of the decisive moments, or photographs with layers or photographs that tell stories.
Posted by bella at 12:28 AM

Email ThisBlogThis!Share to TwitterShare to FacebookShare to Pinterest
Labels: Beyond The Frame, India, POV