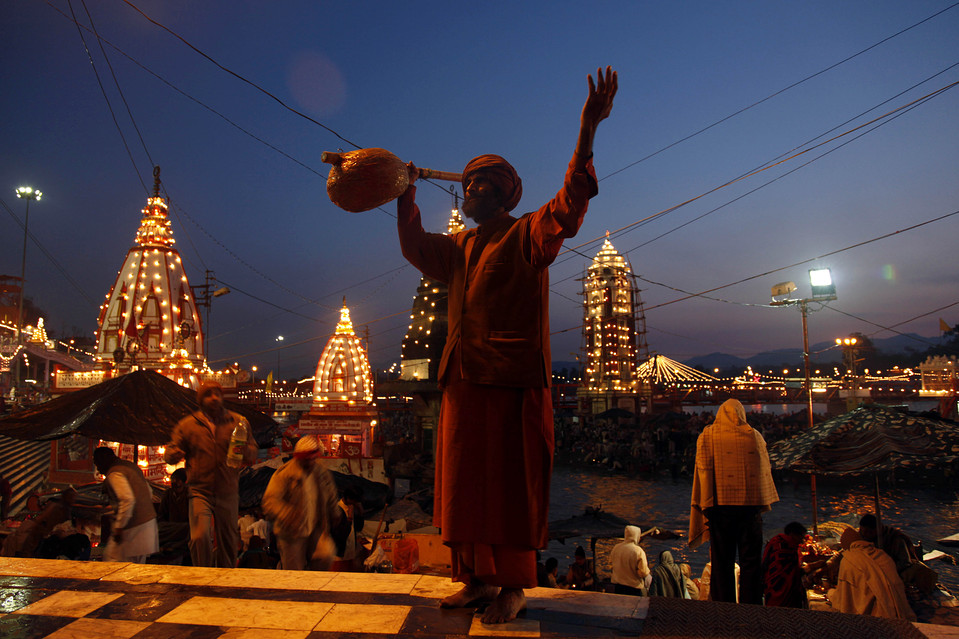 © Rajesh Kumar Singh/AP (Courtesy WSJ Photo Journal)
The three month-long bathing festival Kumbh Mela along the Ganges river in Haridwar occurs every 12 years, and about 50 million Hindu devotees performing their prayers and washing away their sins in river's waters are expected in this holy city. However, non-accredited photographers seem to face mounting difficulties and restrictions in photographing main events, such as the bathing at the Har-Ki-Pairi ghats.

Tom Carter, an American photographer, is quoted as saying: "I was planning on attending the Maha Shivratri Pratham Shahi Snan first royal bath on February 12 and the main royal bath on April 14 to photograph the infamous Naga Sadhu processions, however I was informed that tourists won’t even be allowed in the proximity of HarKiPairi on those dates. Westerners be warned"

The most captivating event of all the Kumbh Melas is undoubtedly the bathing of the naked Naga Sadhus, and many photographers without accreditation will not be able to photograph there. However, there is much to photograph in religious events such as these, and photographers will hopefully have an embarrassment of choices.

Photographers wishing to obtain official press passes need to have entered India on a journalist visa, have a copy of their press card and a letter of accreditation from their organization...otherwise the main bathing areas and Naga Sadhus will be off-limits.

I've read many articles on this event, and exuberant hyperbole describe it as the largest gathering of humanity. It is not. The distinction belongs to the Maha Kumbh Mela which occurs after 12 'Purna Kumbh Melas', or after every 144 years. It was held at Allahabad in early 2001, and was attended by over 60 million people, making it the largest gathering in the world. Satellite imagery of the event were posted online and its mass of humanity was clearly seen.

For recent photographs of the Haridwar event, drop by Tom Bourdon's blog here.

You can also visit my own take on the Maha Kumbh Mela of 2001, which I describe as "rubbing shoulders with ascetics, mendicants, mystics, beggars and charlatans".
Posted by bella at 12:25 AM