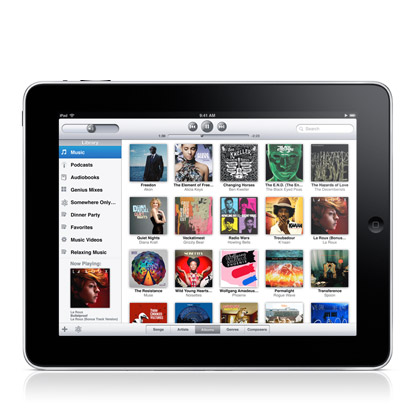 Apple announced its newest creation, the iPad, while I was in the Kutch area in Gujarat, and had no reliable internet access so I'm still pretty much out of the loop in as far as its technical specifications are concerned...but that won't stop me from expressing my knee-jerk opinion on it from what I already know.

I gather from a couple of opinions written about the iPad that the jury (from a photography standpoint) is still out. Some say that it will "save" photojournalism and newspapers, while others are more low-key and only say it will provide a new platform to display one's photographs.

I view it as the latter...a magnified iTouch. No more and no less. I initially got very excited, hoping that it could replace netbooks, but it doesn't. From what I seen, it will not enable photographers to use it as a conduit device to download contents of CF/SD cards unto external hard drives. As a portfolio display device, it will do beautifully though. I use the tiny iTouch to do just that, and must say that it's useful in some occasions. The iPad will do the same in large format, and I expect it will be dazzling.

The absence of Flash is disappointing but expected. It's a pity but I imagine that it will not be hard for photographers to convert their Flash-based multimedia photo essays to QuickTime...or some other application...and show them off that way. As for enjoying photo Flash websites, this device will not do it you.

It's been said that Apple has indeed brought us the iPad, but its success or failure will depend on the app developers. Let's wait and see...we'll know soon enough.
Posted by bella at 12:30 AM