Time Pictures of the Year 2008 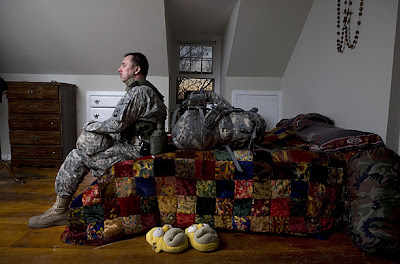 Photograph © Livia Corona/Time-All Rights Reserved
Yes, 'tis the season for the "photos of the year" fever. Time magazine has just published it's Pictures of the Year feature, which showcases 47 photographs its editors believe are reflective of 2008.

Incidentally, Barack Obama has made it as Time's Person of the Year. Not a great surprise...if not him, who?

As for the Pictures of the Year feature, I'm glad to see that one of the images chosen is that of the Afghan mother nursing her child photographed by Alixandra Fazzina. It was chosen as TTP's Photo of the Year just yesterday!

The above photograph is made by Livia Corona, and is of Gregory Gochtovtt of Philadelphia who, laid off from his job at Wachovia Bank in March, decided to enlist in the National Guard. He shipped out to Iraq in December. His Homer Simpson's slippers complete the story, don't they?
Posted by bella at 6:20 AM