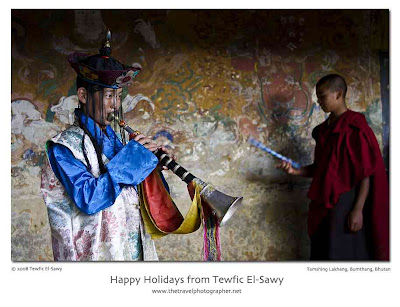 I wish all readers of The Travel Photographer blog a Merry Christmas, a very Happy Holiday Season and a Luminous 2009!

It's the time of year when, amongst many reflective thoughts that whirl around my head, I look back at the genesis of this blog, and marvel at the breathtaking growth in number of its readers, at the number of comments received, and at what I've learned about photography along the way. I'm both thrilled and humbled by the immense talent demonstrated by the many photographers (whether travel or documentary photographers) who appeared on this blog's posts.

This blog started early 2007, and has rapidly grown to be a ravenous "beast" needing a lot of attention. Its readership has spread around the globe, including readers from far-flung countries such as Mongolia and Botswana...and more are subscribing to its feed every day...it's just incredible!

For Xmas, I've found that the Singing Santa & His Reindeers to be the best White Christmas rendition ever! For those who are interested, it's by The Drifters.
Posted by bella at 4:22 AM