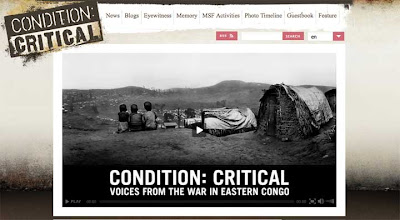 Here's Condition Critical, a feature produced by MediaStorm for Medecins Sans Frontieres on the war in the eastern Congo; a horrific war virtually ignored by the US mainstream media, which is consumed by far more serious matters such as whether the Governor of Illinois is corrupt, if Sarah Palin will be running in 2012...and of course, that Barack Obama will use his middle name when he's inaugurated.

Here's an excerpt: "Hundreds of thousands of people are on the run, fleeing a war raging in eastern Congo in the provinces of North and South Kivu. They are frightened. Many are sick or wounded. Others have been harassed or raped, or have had everything they own stolen. For more than a decade, several armed groups and the army have been fighting each other in the Kivus. The violence has made it impossible for people to lead normal lives. Life isn’t just hard in the Kivus: this region is in critical condition. And things aren’t getting any better. The destiny of everyone in this region of Congo is shaped by the war. The story of their struggle to survive needs to be told."
Posted by bella at 5:58 AM