POV: On The Sly or Candid? 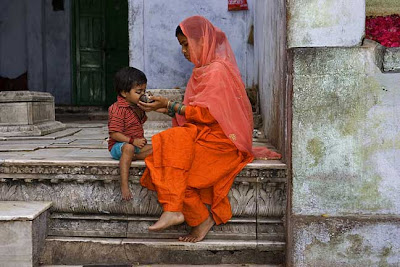 Photograph © Tewfic El-Sawy-All Rights Reserved
As I'm putting the final pieces together for The Travel Photographer's Theyyam of Malabar Photo Expedition in February, I'm thinking about my favorite places to photograph in Delhi, and that's the Sufi shrines of Nizzam-Uddin abd Qutb-Uddin.

These wonderful shrines are not for the faint-hearted, as they usually teem with devout Muslims (Sufis or not), Hindus, Sikhs and others paying their respect to Sufis saints. One may find pilgrims praying, tying colored ribbons at the shrines' gates while others, adopting a more extreme style of worship, do penance by wearing heavy chain vests, or wear chained padlocks around their ankles and women exorcise their demons.

It's a virtual maelstrom of characters and to me, it's photographer's heaven. However, in such an environment, one will find most people willing to be photographed but others either hesitant or unwilling to have lenses thrust in their direction.

I'm a strong proponent of always engaging people before photographing them, and always prefer that approach. I've posted about this a few times here, and for me it's one of the most rewarding aspects of photography. However in environments such as the Sufi shrines, engaging every person one seeks to photograph may be too time-consuming, so candid photography is an option.

The time-honored, and basic, technique I always use is to wait and blend in. This is easier said than done, especially if like me, you're 6' 3" and carry a large camera. However if I'm patient and just sit there, people soon get used to my being there, they'll get busy with whatever they're doing, will find another more entertaining subject, and I can then photograph candidly without too much fuss.

Another technique is to pretend one is not photographing them at all...by not looking at and evaluating the subject before clicking. Some of the newer DSLRs have the LiveView function which makes such a technique easier, since one can frame the subject and scene using the camera's display rather than the viewfinder.

One of the most difficult places to photograph for me is the famed Djema el-Fna in Marrakesh, where fascinating characters abound, but where photography is not always welcome (except if one pays up). I recall using my 70-200 lens to photograph a guerrab (traditional water-carrier) at some distance, however he realized I was photographing him, and suddenly came yelling at me. Since I had no change, I immediately knew I was in a pickle...so I ignored his run towards me, and continued to aim my lens at the spot he had left...as if he hadn't been the "target" in the first place. My expression was a study of puzzlement and incomprehension, mixed with mild irritation, when the guerrab tugged at my sleeve asking for money, but by then he thought I was photographing something else...and he had to walk away empty-handed. If I had change, I would've paid him rather than use this duplicity.

As I said, I much prefer to be upfront when photographing people, but sometimes one has to be...what's the word I'm looking for...ah, yes it's inventive.
Posted by bella at 6:19 AM