The Big Picture's Photographs of the Year 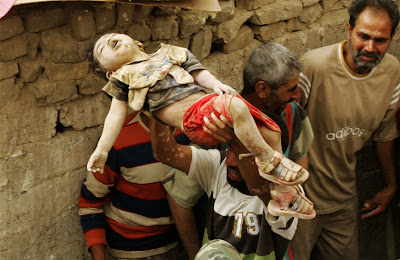 Photograph © REUTERS/Kareem Raheem
One of the better photo blogs is "The Big Picture" launched by the Boston Globe, and compiled by Alan Taylor, who credits the old Life magazine, National Geographic, Mediastorm and MSNBC for his inspiration. The Big Picture joins the fray with its Photographs of the Year Part 1 using its high-quality large images.

One of the photographs chosen by the Boston Globe is the one above of a man carrying the body of a child recovered from the rubble of a destroyed house after an air strike in Baghdad's Sadr City in Iraq on April 29, 2008.

When talking about the motive of the Iraqi journalist in throwing a pair of shoes at him during a press conference in Baghdad; a gesture of utmost contempt in the Middle East, George W. Bush said that he didn't know what the journalist's "beef" was. Well, he should be shown this photograph...perhaps it'll jog his faulty memory.
Posted by bella at 4:20 AM