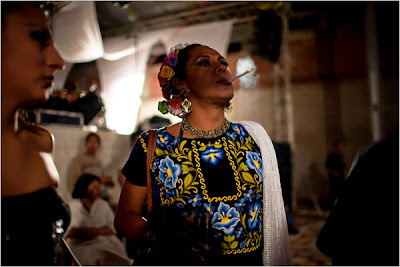 Photograph © Katie Orlinsky/NYT-All Rights Reserved
The New York Times features a photo essay by Katie Orlinsky titled A Lifestyle Distinct: The Muxe of Mexico. In Zapotec cultures of Oaxaca state, a muxe is a physically male individual who dresses and behaves as a woman. These individuals are generally regarded by Mexicans as a third gender, and live their lives as women, choosing men as sexual or romantic partners. The word muxe is thought to derive from the Spanish word "mujer".

The accompanying article (by Marc Lacey) tells us that while Mexico can be intolerant of homosexuality, "nowhere are attitudes toward sex and gender quite as elastic as in the far reaches of the southern state of Oaxaca".

Katie Orlinksy is a photojournalist who divides her time between photographing news in New York City and southern Mexico where she works on long term projects. She has been published in the New York Times, LIFE, Newsweek, Time, Le Monde and various other global publications.

Katie was previously featured on TTP here in connection with her being awarded a Foundry Photojournalism Workshop scholarship in June 2008.

(Registration by The New York Times may be required)
Posted by bella at 5:07 AM