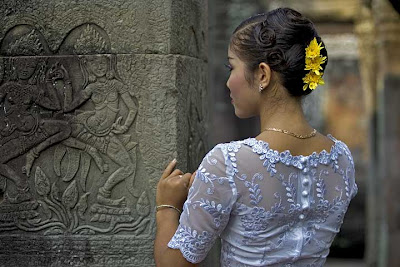 Photograph © Tewfic El-Sawy-All Rights Reserved
I've ranted quite a few times about the mindless uber-development which I witnessed in Siem Reap in 2005 and 2006, and how it seemed every time I blinked, a new hotel appeared on the scene....and how I had to make sure that our photographers woke up before dawn to be able to photograph at the temples before waves of tour groups swamped us. I predicted at the time that Siem Reap would turn into a hideous oleo of motels, hotels, inns and fleabags within a few years. Charitably, it's been described as a town of Club Meds.

It turns out I wasn't exaggerating...in fact, perhaps quite the opposite. The National Geographic's Intelligent Travel blog advises people not to go to Siem Reap and to the Angkor complex, and recommends postponing their visits. It seems the sheer volume of tourists has taken a toll on the Angkor monuments and temples, and that several of the important temples are being restored. Some have unsightly scaffolding with areas just cordoned off. The central section of Angkor Wat is closed to visitors until 2010 at the earliest.
Posted by bella at 3:33 PM