Private: The Other Side of India 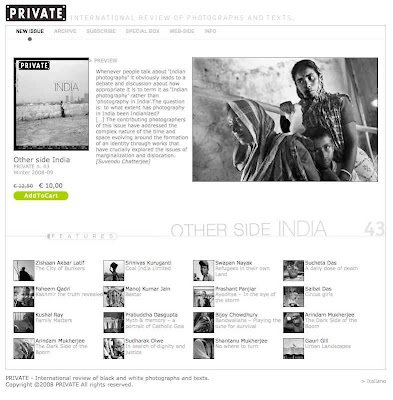 PRIVATE is a self-described quarterly international review of black and white photographs and texts, and an "independent and itinerant publication that offer its photographic journey since 1992".

Its website, Private Photo Review, is showcasing a special issue titled The Other Side of India, with black & white photographs by Indian photographers, such as Srinivas Kuruganti with Coal India Limited, Saibal Das with Circus Girls, Bijoy Chowdhury with Bandwallahs, and others.

I wish Private Photo Review could have shown us a sample of these photographs in a larger format. As they are, they're too small for us to really appreciate. For instance, it could've used Issuu to publish a sample magazine, which would enhanced its eye-candy appeal.
Posted by bella at 5:14 AM