The Asia Society Museum in New York City is to show Princes and Painters in Mughal Delhi, 1707-1857, an exhibition showcasing Delhi's rich rich history of art, artists and patrons who flourished during this critical period.

The exhibition will focus on the reigns of the last four Mughal emperors — Muhammad Shah, Shah Alam II, Akbar Shah II and Bahadur Shah II Zafar. The latter emperor is the subject of William Dalrymple "The Last Mughal"...a captivating biography of Bahadur Shah Zafar, a descendant of both Genghis Khan and Timur the Great, and of the city of Delhi around the time of the Sepoy Rebellion. 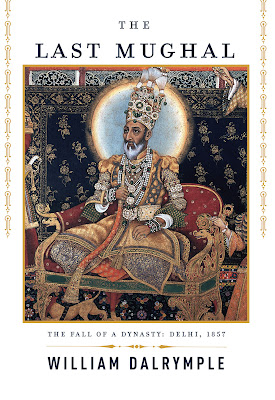 The Sepoy Rebellion was eventually put down with great brutality by the British in a series of bloody battles, and Old Delhi was virtually ransacked. For those of us who know it, the Red Fort and the Jami Masjid were within a hair's breath of being razed, but were saved through the intercession of a high ranking British military commander. Imagine Old Delhi without these two architectural and historical gems?!

Bahadur Shah Zafar was sent into exile in Burma, where he died. He was banished not so much for what he did during the Rebellion, but because the Victorian Evangelicals were determined to replace his influence with that of Christianity. Zafar, having a Hindu mother, and an observant Muslim, appealed to India's major two religions and that couldn't be tolerated.

Researching the subject for this post, I read in a 2009 issue of the Telegraph that efforts were made to trace Zafar's descendants. It seems many have fled to Kolkata and Aurangabad, while others live in Burma and Pakistan.

Note to Publishers and Agents: I do not feature book reviews unless I read and like the books I write about or mention. So do not waste your time emailing me to publicize your book(s) on this blog. I will not.
Posted by bella at 2:29 AM