Over the last few weeks I have been making some changes to my gear. In particular, I’ve changed two of my core gear items, my backpack and my shelter, in addition to changing some of the food that I carry. Theoretical discussions about gear are one thing, practical testing is another. So, before I undertook any more serious trip with these new items, I decided to do a short easy trip this past weekend to see how well they function and if any changes needed to be made.

I started out early in the morning in Harriman State Park. I figured I would do a loop that I had done before, so I knew the terrain, water sources, etc. There were some fast elevation changes, but no bushwhacking, so it would offer a good test for the new gear without creating serious problems if it didn’t work out as expected. 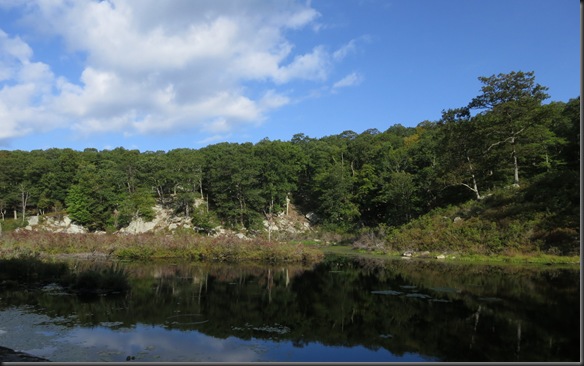 The new pack is the REI Flash 62. I originally bought it as my winter pack. It has a volume of 62L, which lets me fit all of my winter gear and food for about five days. I quickly figured out however that a lot of the volume was contained in the front and top pockets. The main compartment itself is about 50L. If I keep the front compartment empty, I can comfortably use the pack for my three season gear as well. 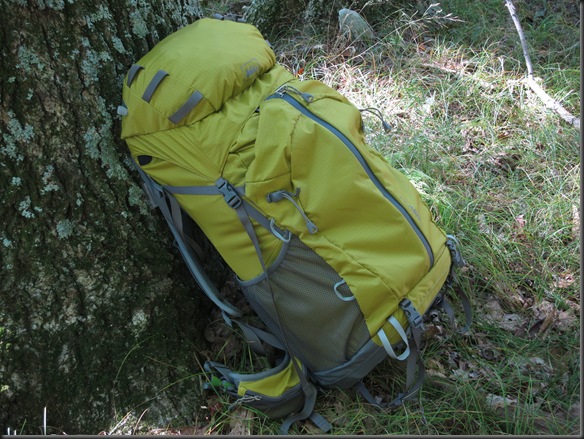 That’s exactly what I’ve decided to do, so this weekend I was testing the pack with the three season gear.

After some relatively steep climbing, I reached the rocky terrain above the tree line. Using a new pack was an interesting experience. It is a relatively light pack, coming in at exactly 3lb. This is the lightest internal frame 60+L pack I have been able to find. Even so, it has a very rigid frame. When the hip belt is well tightened, almost all of the weight is transferred the the hips. It made it easy to move through the steep terrain. 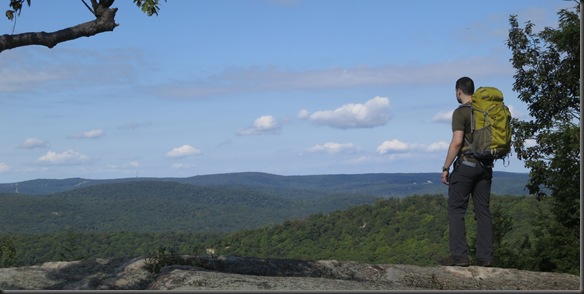 I continued traveling above the tree line for most of the day. At one point I moved down into the trees to get in the shade for some lunch. 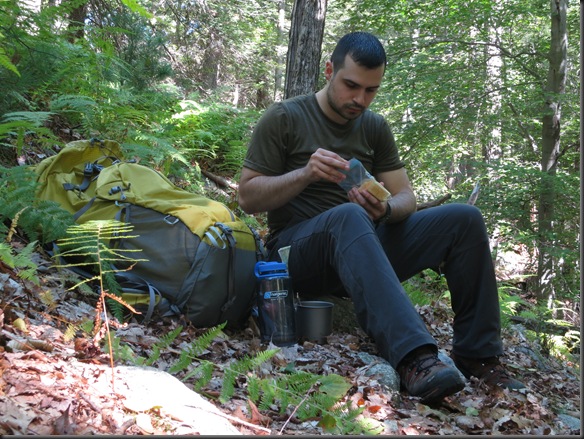 I had made some changes to my food, in particular to the food I eat during the day. During the last few trips I had been getting tired of sweet food, and for some reason nuts, so for this one I decided to try more savory foods. I replaced the usual granola bars and chocolate with crackers, pepperoni and dried tomatoes. 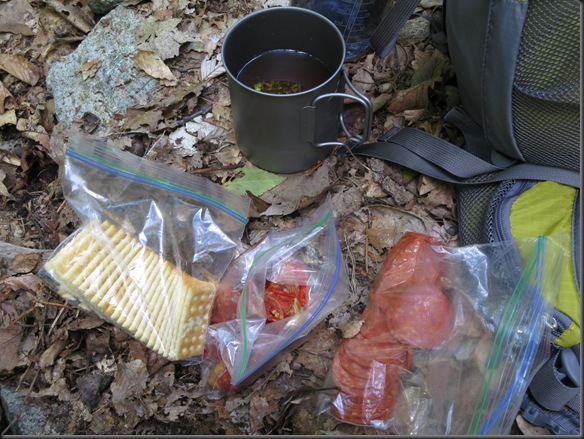 I was very satisfied with this change in food. Maybe I was just getting bored with the old stuff. The food is also dense in calories. The amount you see in the above picture contain 1577 calories.

After lunch it was back above the tree line to continue my trip. 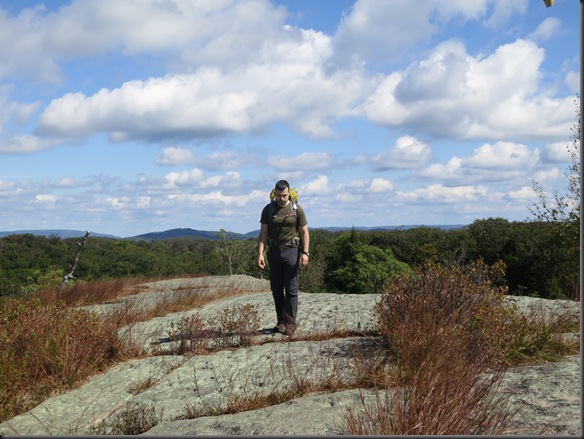 In late afternoon, I dipped back below the tree line in order to set up camp and take a closer look at the next piece of gear, the Go Lite Shangri-La 3. 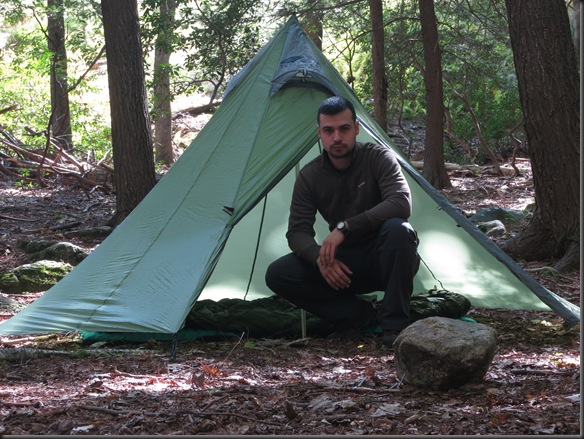 As some of you know, I have been using the larger Go Lite Shangri-La 5 for quite some time now. I have been very happy with the shelter. It is light weight, offers a lot of room, and allows you to work in it as you would under a tarp since it has no floor. The only issue I was having with it was that it required a large space to pitch. This was a particularly large issue when bushwhacking because I had a hard time finding large enough open spaces for the shelter. So, I decided to try the Shangri-La 3. It is the exact same design (well, it is a hexagonal rather rectangular shape) but has a much smaller foot print than the Shangri-La 5.

The shelter is accordingly noticeably smaller, but still large enough to function much in the same way as it’s larger brother the Shangri-La 5. After setting up the shelter, I lit the fire to cook some dinner. 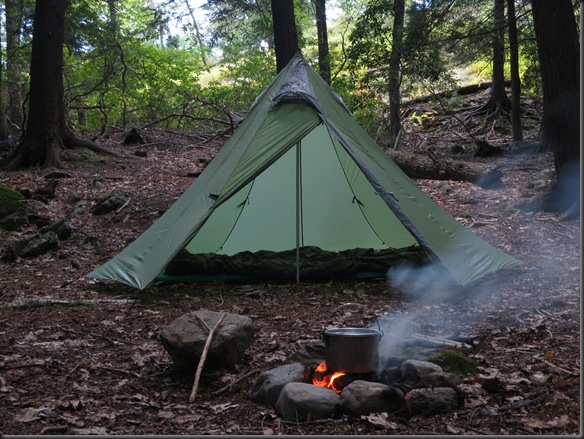 For dinner I was trying out another food change. I have been eating a lot of mashed potatoes. They are easy to make and very calorie dense. I figured I would change it up a bit however, and try some stove top stuffing instead. It is just as easy to make (just add water), and is also calorie dense. The only down side is that it is bulkier to pack than mashed potatoes. I also added some chopped salami. 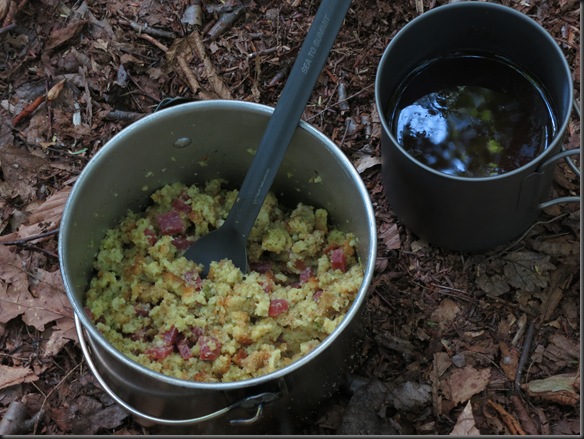 Now, this is one of those things that pops up when you are in the woods, that is easy to ignore when you are testing things at home. The food was great, but it left a lot of fat residue on the pot. It is something I didn’t think about when I was testing it at home, but it was an issue in the woods. I decided to use some ashes from the fire to clean it up. You know how they say that using ashes is as good as soap? Well, it’s not. It did however get the job done eventually. I unfortunately wasted more water in the cleaning process than I would have liked to.

After that, I called it a night. The shelter worked well. I’ll have to see how well it deals with sagging during heavy snow in winter, but I’ll have to wait a few months for that.

The next day I made breakfast and headed out. Nothing interesting to report. I did stop at one point to fill up with water. 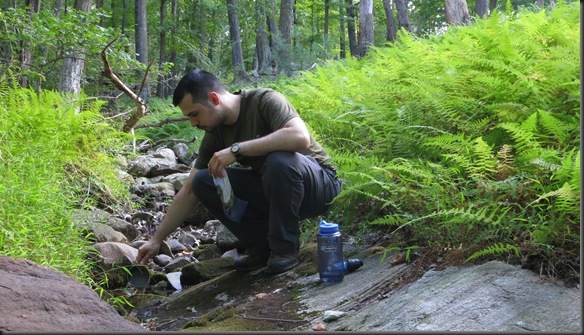 After that, it was a short trek to the car. As expected, the trip was uneventful, and the new gear performed well. Here is the GPS record of the trip if for some reason you guys are interested. 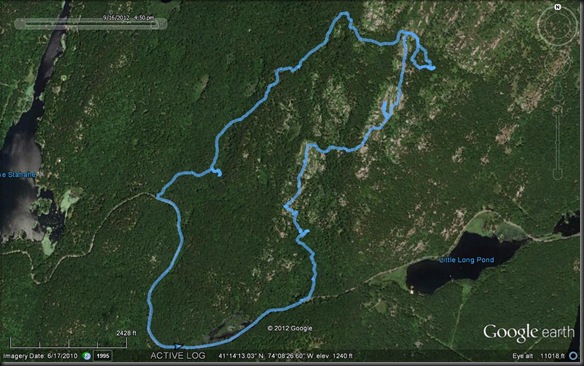 Well, nothing more to report. Now that the gear has had some preliminary tests, I’ll try a more challenging trip the next time out.