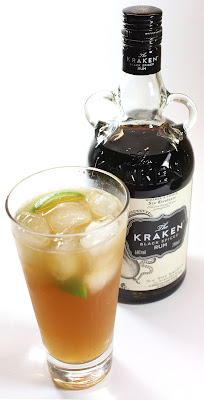 The Kraken Black Spiced Rum is a spiced Caribbean rum, aged and enriched with exotic spices including cinnamon, ginger and clove.
I have been sent a recipe for The Perfect Storm - drop ice into a highball glass, pour over Kraken Black Spiced Rum, squeeze fresh lime juice over, top with Ginger Beer and garnish with lime wedges. So very delicious and refreshing too. Other drink ideas to try are neat over ice, with cola or ginger ale. I hoped when I accepted this fabulous bottle of rum for review I would enjoy the drink and I absolutely love it.  I know I won't be drinking it neat, but there are chilled cans of Ginger Beer in the fridge ready and waiting......

The unique bottle is a Victorian flagon-style, a distinctive label with an image of The Kraken a mythical sea beast, and the two glass handles mimic the eyes.

The Kraken is distilled in Trinidad and Tobago from sweet molasses.  Ageing takes place for two years in ex-bourbon whiskey barrels.  The aged rum is then blended with a range of 14 spices, including cinnamon, ginger and clove.

Thank you Martin for the review bottle of The Kraken.
Posted by bella at 1:15 PM

Email ThisBlogThis!Share to TwitterShare to FacebookShare to Pinterest
Labels: Reviews