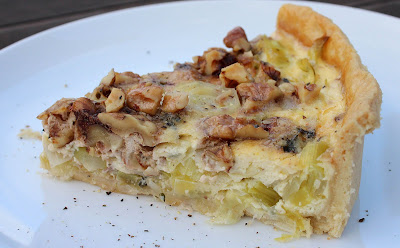 I was brought up in Stilton Cheese and pork pie country, there never seemed to be a day when either Stilton Cheese or pork pies didn't get a mention.  The 'grown ups' ate their Stilton Cheese with  Lincolnshire celery, and pork pies were eaten with home made piccalilli.  None of these appealed to me, and I would sooner have eaten mud, than eat these strange foods. It wasn't until I became a 'grown up' I began eating and appreciating Stilton Cheese.  I'm never going to be a pork pie fan, but I love the hot water pastry they are made from.  I ask hubby to let me eat the pastry from his pork pie but for some reason he always tells me it is an unreasonable request.......

Stilton Cheese, leeks and walnuts are a match made in heaven.  This quiche was really good other than one or two niggles.  There isn't much of a custard layer and the amount of walnuts used in the original recipe needed to be halved, perhaps it should be called Walnut, Leek and Stilton Quiche. 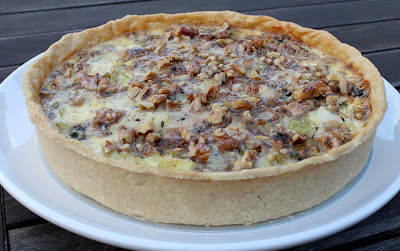 
1.  Put flour, butter and lard into a bowl, rub in until it looks like breadcrumbs add 3 tablespoons cold water, bind to make a dough.
2.  Shape into a round disc, wrap in clingwrap and pop in the fridge for 30 minutes.
3.  Remove pastry from fridge.
4.  Preheat the oven to 200°C. Place a large baking tray in the oven to preheat.
5.  Roll the pastry and line the tart tin.  Prick the base and put in the fridge for 30 minutes.  Line the pastry case with crumpled baking parchment, fill with baking beans.  Place the tin on the preheated baking tray and put in the oven for 15 minutes.  Remove the parchment paper and baking beans.
6.  Brush the base of the tart with some of the beaten egg from the filling and return to the oven for another 10 minutes.
7.  Set the oven temperature to 180°C .
8.  Take a large frying pan and melt the butter.  Add the leeks and cook until softened.  Stir in the thyme, grind over black pepper, cool.
9.  Add the creme fraiche to the beaten eggs and milk.  Add the Parmesan and nutmeg, season with black pepper.
10. Spread the leeks over the base of the cooked tart, sprinkle over half of the walnuts.  Scatter over the  crumbled Stilton cheese.  Pour the egg mixture over.  Sprinkle over the remaining walnuts.
11. Bake 35-40 minutes until the filling is set and golden brown.