Recently I was tagged by a fellow blogger at OutdoorEnvy to list my three favorite backpacking/bushcraft items. I’ve given the question a lot of thought. I like all of my gear, and I love using it. At the same time, I constantly keep changing and tinkering with my gear, so it’s hard to say which items are my favorite. The way I decided to resolve the issue is to pick the items that I love so much that I am unlikely to replace. These are the items that if I lost or damaged them, I would immediately try to buy another one, and if they are no longer in production, I would have looking for them on ebay. So, here are my three favorite items, listed in order of preference.

My top favorite item is my Salomon Quest 4D boots. I know, I know, we all want to see axes and knives, but the truth is that I will replace all of my other gear before I replace these boots. They just fit me perfectly. I had to try a lot of boots before I found these. In fact, I didn’t even know anything about them when I bought them. I simply put them on, and they fit so well, I had to get them. 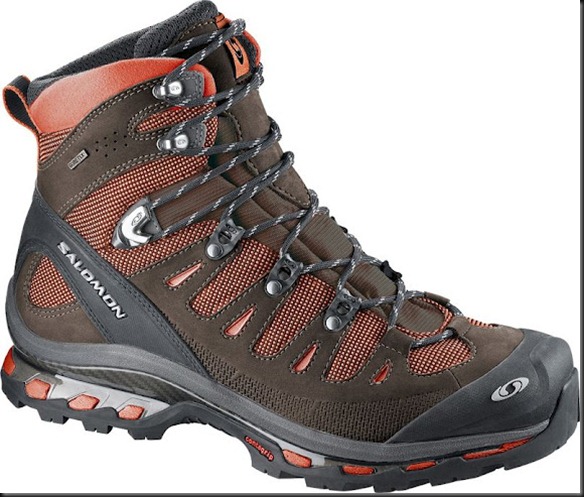 I’ve spared you the picture of my actual boots, which are now a few years old. I know there has been a trend in some parts of the community to move to lower height trail runners, but I stick to relatively high boots for one reason. It is not because of ankle support. I’ve never felt the need for it, nor do I think that a high boot will keep me from twisting my ankle. The reason is that it protects my toes when going down heel. By tightening the upper part of the boot, it keeps my toes from sliding forward into the boot, when moving fast down hill. It makes a huge difference in terms of comfort and mobility. The boots have a GoreTex lining. I know that there are also many people who dislike this feature, but I love it. It is true that when compared to unlined boots, if you get GoreTex lined boots wet on the inside, they will dry more slowly. However, in the most common circumstances, where you are going through mud or puddles, the lining keeps my feet dry and comfortable. With a pair of wool socks, I have had no moisture issues on the inside of the boots.

My second favorite item is my Open Country 2Qt pot. I don’t obsess too much about pots, but I know what I like when I see it. I’ve been using the Open Country 2Qt pot for quite some time now, and have been extremely happy with it. I’ve bought a spare one just in case they stop making them. 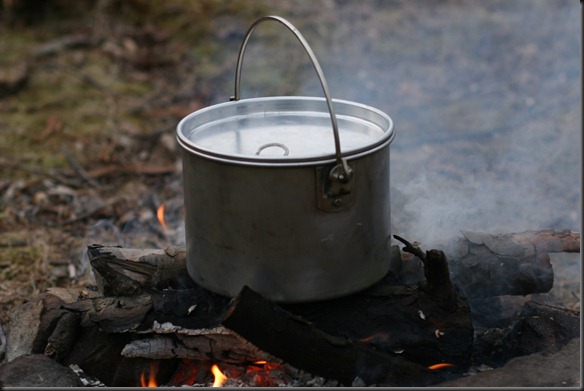 It is a very cheap aluminum pot that most people don’t give a second thought when they see it in a store. It however has everything I look for in a pot. It weighs 7.7oz, and costs $11. It has a 2Qt capacity, which is the volume I prefer in a pot. While I can get away with a smaller pot, I like the extra volume so I can boil things like rice without worrying about overflow or splatter. It also has a wide base, which I find preferable for cooking both because of the added stability and the better heat distribution. It is a fairly thin pot, so initially I was worried about it getting damaged, but i have had it for over year now, and have not had a single issue with it.

My third favorite item is my Husqvarna hatchet. It is the older model that is no longer produced. 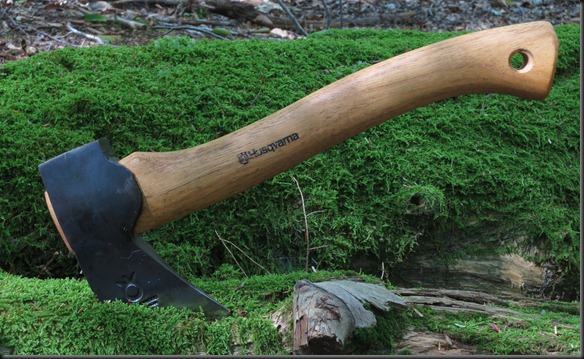 The hatchet has a 1.25lb head and a foot long handle. This is the hatchet/axe that I carry on most of my trips, and I find that it lets me do everything I need. I could replace it with other hatchets that will work just as well, but I just love the feel of this one.

Well, that’s it. They are not the most exciting items, but they are the ones I would not want to replace with anything else.