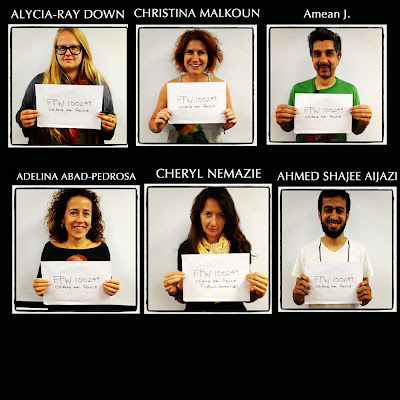 Well, the Saturday evening presentations of the Foundry Photojournalism Workshop were held at the Chiang Mai University, and I can confirm that the evening was a total success.

My Multimedia For Photographers class presentations started with Near Sky, a monochromatic photo essay documenting the production of the Chaw Fah (symbols atop the spires of temples) by Alycia Down,  followed by Close Encounters of the Foundry Kind by Amean J...consisting of clips of Foundry students expressing their expectations from the Workshop, then followed by Loun Steve, a personal insight into the life of an American expatriate living in Chiang Mai, afflicted by Tourette disease and Huntington's Disease by Christina Malkoun.

Then it was Ahmed Shajee Aijazi's turn for his personal take on Muslim life in Chiang Mai with his Under The Ramadan Moon, which depicted the Islamic tradition of fasting during Ramadan, and this was followed by Aroy May? by Adelina Abad-Pedrosa, a photo essay of the vibrant street food culture in Chiang Mai, which was followed by Cheryl Nemazie's Night At The Naga, a monochromatic look (complete with the foot thumping music of the legendary Johnny Cash) of a tattoo parlor on Loi Kroh Road.

Three of the audio slideshows were in black and white, and three were in color. All of them different from a visual standpoint and content.

NB: It is indeed a small world. I met a photographer who turns out lived on the same street I am on now in New York City...she moved a few years ago, but what are the odds of that happening? And another photographer who saw me on Sudder Street in Kolkata last October...she also stayed in a nearby hotel and ate at some of the same restaurants. Incredible isn't it?

Most of the photographers with whom I spoke to were following my The Travel Photographer blog...which chuffs me a lot.
Posted by bella at 12:02 AM