Keeping with the Les Stroud team, many of you know that a while back he released a bushcraft knife called the Temagami, which is made by Helle. Well, recently he released a line of survival knives, which are manufactured by Camillus. From what I could see, he was using one of the knives on the first episode of Survivorman 10 Days. 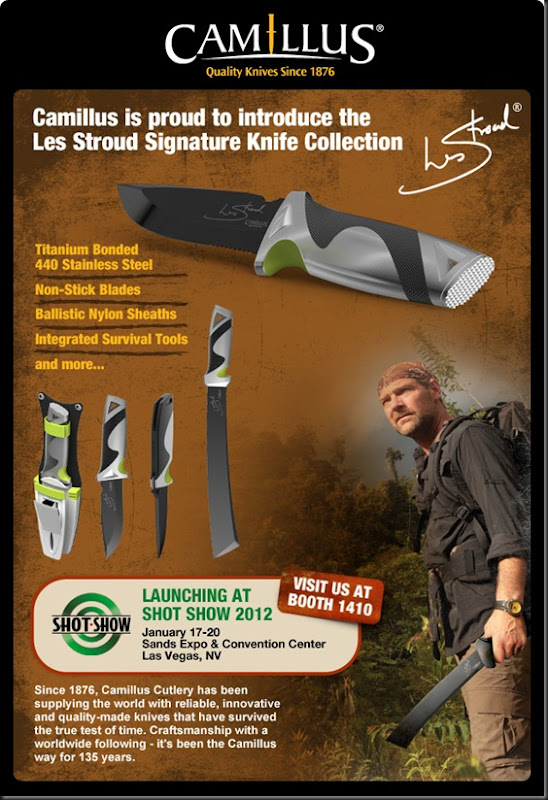 Here is a statement released by Les about the knives:

“Hi all - I got to thinkin'....there was a press release already, but other than that there have been just a few questions here and there about me releasing a survival knife line. Firstly - yes - I have already released a BUSHCRAFT knife with the most excellent company: Helle out of Norway. The purpose was to design a high end bushcraft knife that is a one of a kind knife made by hand by the fantastic people at Helle. No two knives in this line are alike. I have even been able to visit the plant myself and sit at some of the machines hand crafting out my own blade. - In fact someone will unknowingly get one of these knives and it will be the one I worked on myself!!! I am very proud of these knives and very proud of working with Helle on them. Now. That said - Helle and I were not interested in developing a knife line together that was more specific to survival - including some survival attachments. That is where Camillus comes in. I had turned down a number of knife companies who had courted me (including one specific line of knives you could probably guess at - they went with someone else) simply because they would not adhere to my strict quality policy: "If I am going to design a survival knife for you to put in your hands - then it better be quality enough to put in my own". They were all more interested in profit and celebrity. Camillus is fully committed to working with my own designs to develop a line of survival knives you can trust with your life. So if you want that one of a kind bushcrafting knife then please enjoy what I personally designed with Helle....and if you want to outfit yourself with a survival knife designed personally by me and tested by me - then you will see the prototype we will unveil in Vegas at the Shot show in January - I think I will be there at the show on the 18th. ....Camillus had no issues with the fact that I designed a beautiful one of a kind bushcraft knife with Helle and Helle has no issue that I am designing a fully loaded survival knife with Camillus......Listen folks - whether I became Survivorman and created a whole new genre of TV or not - I would have eventually tried to write a manual (which I did called Survive!) develop a line of survival knives and develop a survival kit. As an instructor of many years - these three initiatives were always in my heart to do. So now I am able to do so thanks to creating survival for TV - ok fine - buts what's most important to me is that whatever I put my name on - it be of the highest quality. Know this: In my opinion - the survival knife...book...kit that I put on the market will be the best there is. The price point may be a little higher than those who are cashing in on the whole 'survival thing'....but our lives are worth it. For me its not about marketing or cashing in on celebrity....its about survival. Les”

Email ThisBlogThis!Share to TwitterShare to FacebookShare to Pinterest
Labels: Knives