This is another post published by OPERATOR 1975 on Blades and Bushcraft. Here he discusses some details and the history of Kelly axes, from Kelly Works to True Temper. It is a lengthy post full of very valuable information.

This company is very difficult, with all the organization changes, moves, people involved, long time line, etc.  So if someones sees something incorrect, please bring it up so we can get some verification and go from there.  The more info the better.

So Kelly Axe has a long winding history thru the axe years.  It appears (and depending on what you read in books, online, catalogs, etc it will vary, trust me) that the Kelly Axe got started in the mid 1800s - pretty much in line with our other main companies we have talked about.  Again, depending on your reference, this will vary.  From what I can tell though, the axes part of this equation started around 1874, give or take a couple years.  Things are complicated from the start because the Kelly family (William C Kelly the main player, but alas, there was #2 of them!) was in business with other ventures prior to this date, but it seems it took off in axes around 1874.  At this time, the operation was in Louisville, KY.  The name used around this time appears to have been Kelly Axe Mfg Co.

After some time in Loisville, the decision was made to pack up shop and move the business to Alexandria, Indiana in 1896.  The entire operation was moved based of the premise of an indication of natural resources that would aide in the manufacture of axes.  This move proved to be not worth it though, and the decision was made relative quickly to move the entire operation to Charleston, WV in 1904.  With this move in 1904, the additional name of Kelly Axe and Tool Co was now also used, if not replacing the older name.  There is confusion about this, and we are just getting started.  Some sources say that the Tool Co name was now being used because an office for Kelly was opened in NYC at this time, and this made marketing easier.  Take that for what you will.  We have talked about the importance of marketing before with axes, so it does make sense.

Here is an example of the Kelly Mfg Co name - 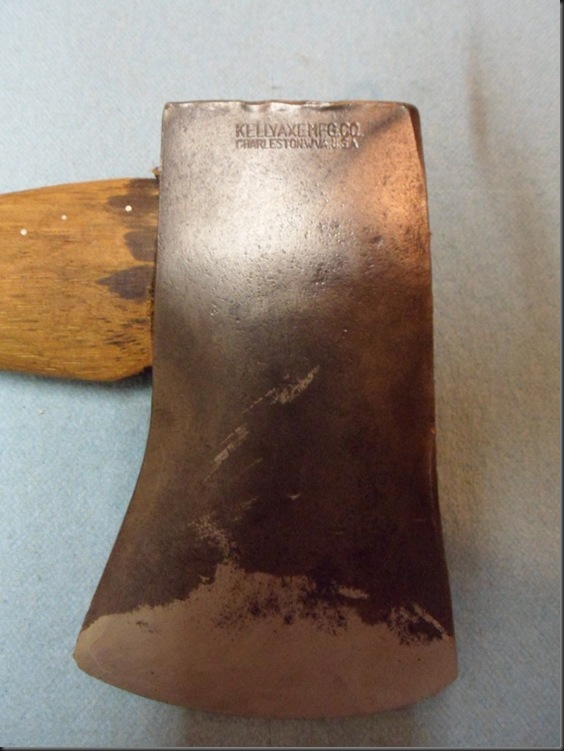 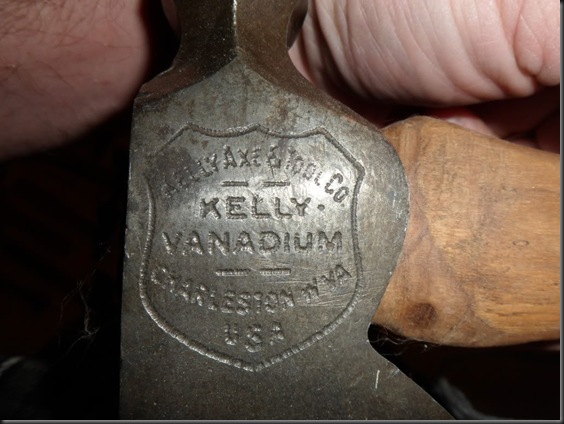 So, continuing on, hopefully someone has said to themself - "Hey were are in the early 1900s here, what about the big boy on the block, the American Axe and Tool Co?"  Well I am glad you asked.  The AATCo was the congolmerate of roughly 16 axes companies into one major company in the late 1800s(1889).  Kelly was left out, for whatever reason.  Maybe due to them moving, not being seen as stable, or maybe they didnt have the production numbers needed to be included.  This decision would ultimately come back to haunt them, as for in 1921 Kelly bought out the AATCo entirely.  This is were things get real interesting.

So remember, the AATCo had 16 or so companies in it, and when they merged, AATCo now had rights to all those names and labels of axes of the individual makers prior.  Now Kelly owns AATCo, and yep, you guess it, now has rights to all those names, labels, etc.  This included some Mann lines, Douglas, Hubbard, Lippincott, etc.  The axe lines or names for Kelly just exploded.  They were now without a doubt the largest axe manufacturer in the world.  They relocated all the machinery to Charleston, and the plant basically tripled in size.  Workforce now of roughly 1000 workers, they were able to produce some serious numbers daily.  The entire operation was in Charleston except they did have a handle facility in Tennessee.

However, as we have seen in the axe world, the good times only last so long, and in 1930 the American Fork and Hoe Co completely bought out Kelly.  There are various reasons for this, obviously the depression was a major factor at play.  I wonder if they were just too big though for their own good, and it ended up costing them at this time.  At this time then in 1930, the name changed again to Kelly Axe and Tool Works.  However, many sources say that the previous 2 names were still being used after.  Good times.  The AFH company had the axe making arm of its company now, and production actually did decrease some with this.

An example of a Kelly Works axe - 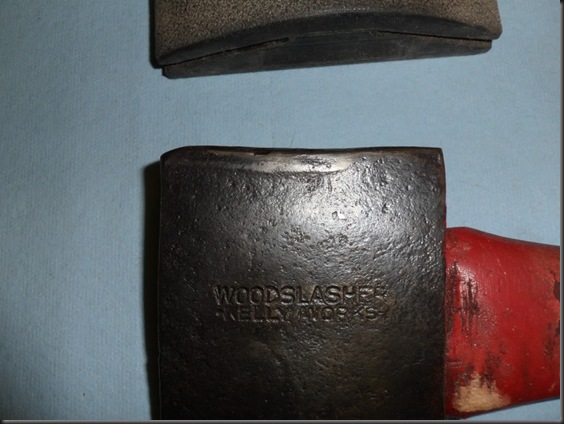 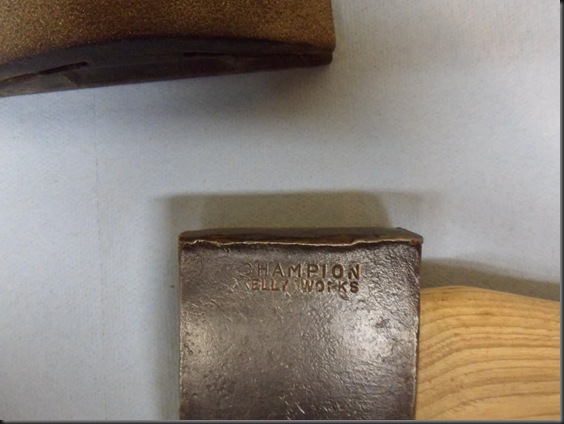 So now the AFHCo is in control, and not done with the changes yet.  Some years later, there is a restructing, and the axe division gets renamed to True Temper.  This is the name most people are familar with when it comes to Kelly Axes.  This rename to True Temper came about in 1949.  So remember, anything Kelly you see with TT on it should be post 1949.  I use this to gauge Kelly when looking at axes.  Now the fun starts because you will see axes marked TT Kelly Works on them - I take it this was to ensure that people knew that the True Temper name was associated with Kelly quality and name recognition.

Here is a simple example - 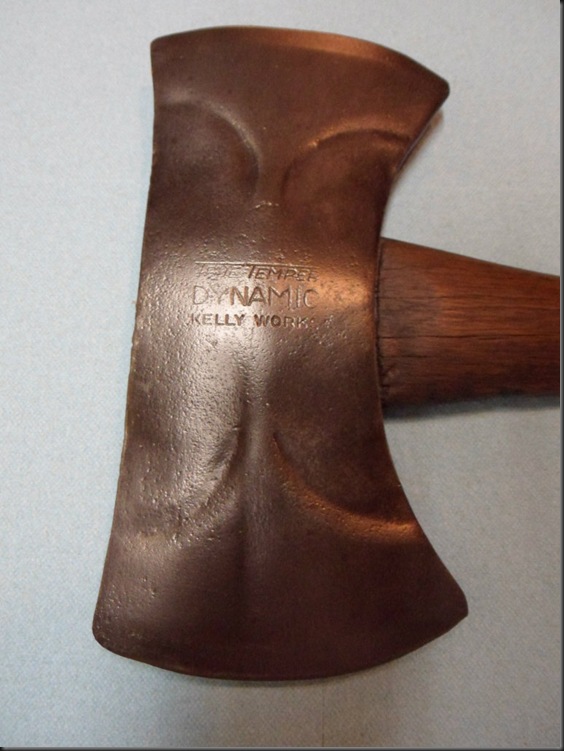 This is where you will really start to see the older names used by TT - I think this was done again for marketing/name recognition purposes - for people familar with the axe names used before such as Dynamic, Red Warrior, Falls City, HandMade, Vulcan, etc. 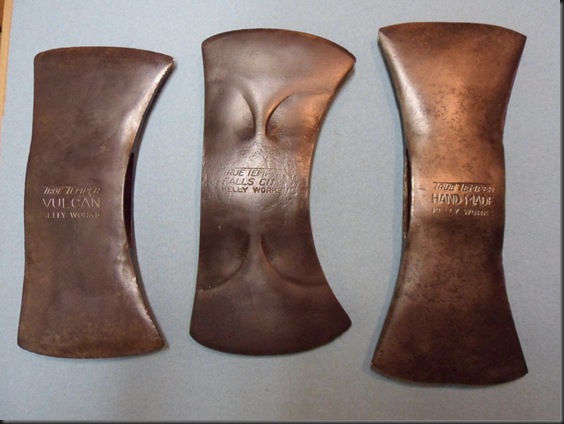 So Kelly was able to stay in business somewhat longer than most axe makers - they made it until 1983 when the HQ was moved to Cleveland and the Charleston operation shut down.  This marked the end of a great run overall for this axe line that is widely known not only in the US, but also in Canada (Wellland Vale), Australia, and I am sure to whatever degree in south america.  The rights to the names of the line were sold to Barco Industries in 1987, and they still produce a couple lines of Kellys.  They are in Reading, Pa.

So now that the timeline is over, lets look back at some of their products.

Obviously they made hatchets - Here are a couple examples from the 70s.  Quality no where near the older lines. 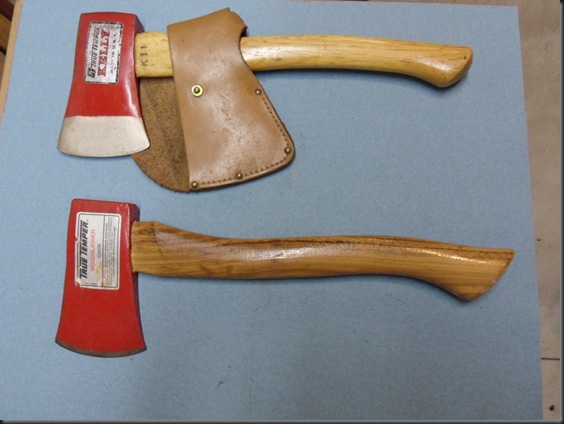 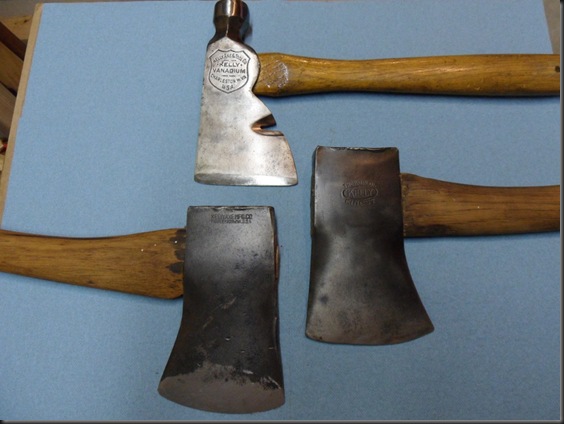 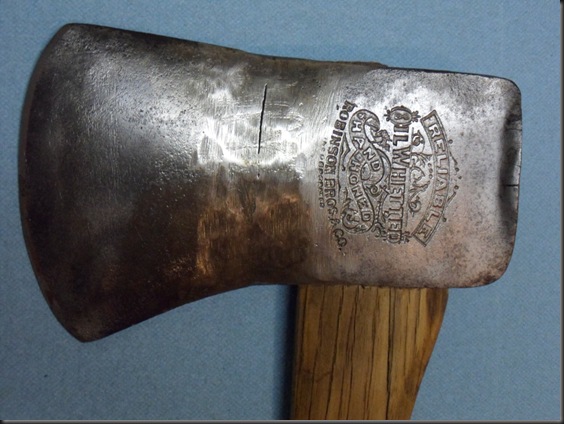 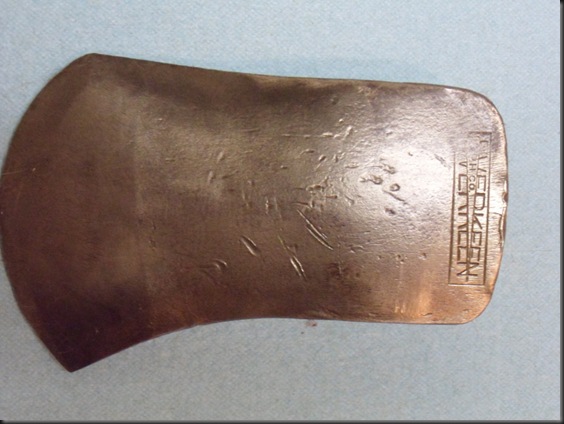 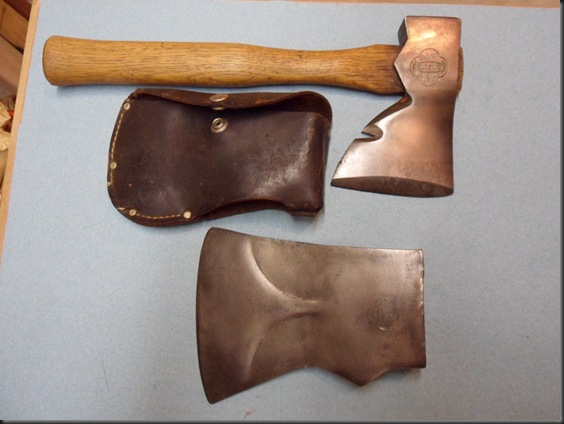 Kelly made many different hardware lines - Keen Kutter being one of the most popular.  There are findings that say that Mann Edge Tool also made Keen Kutter at one time, so I didnt included any in here.

Here are some examples - 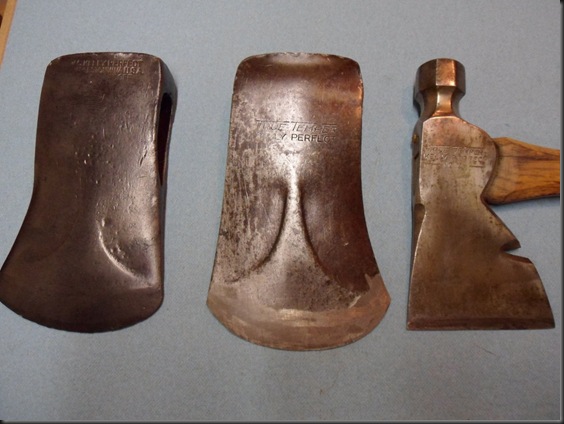 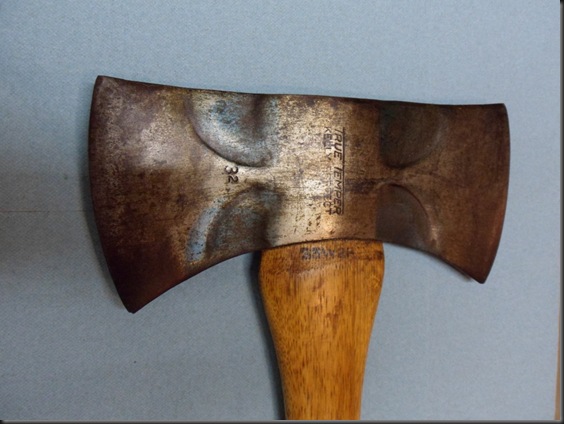 And then the Flint Edge line - 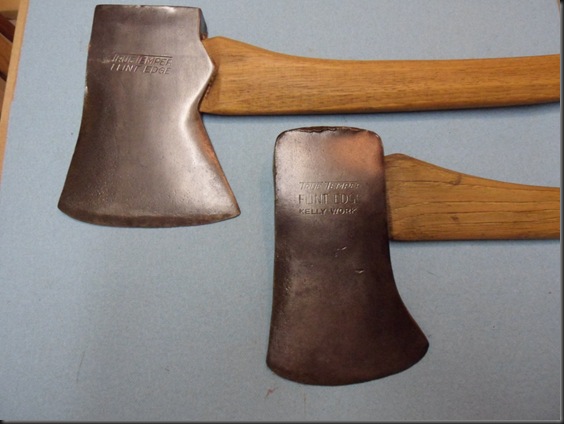 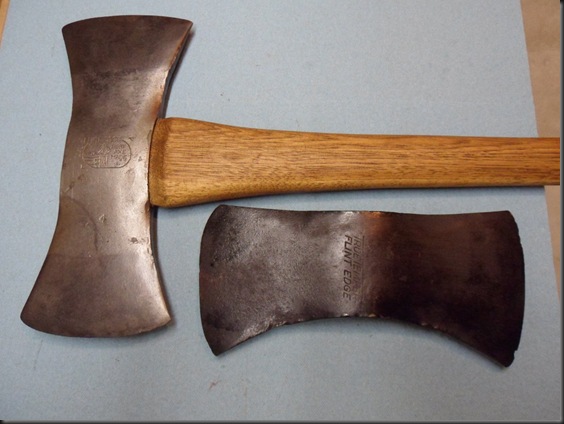 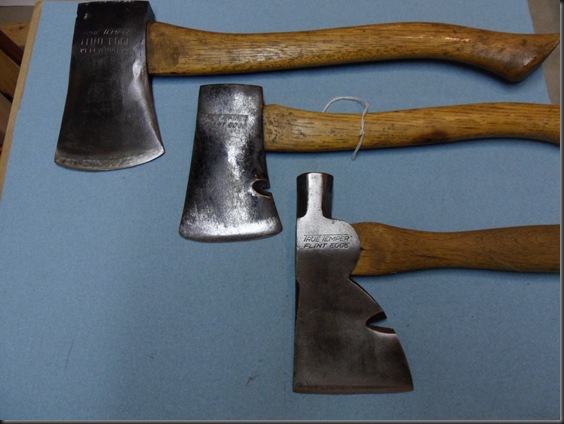 As stated, Kelly made lines for all needs, including the RR.  Here are a couple Flint Edge RR lines - 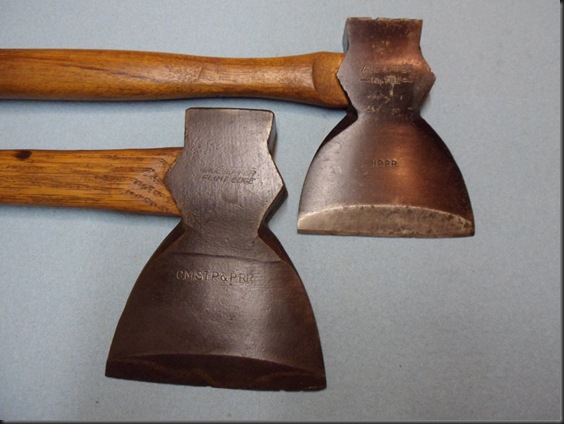 Let us not forget some of the other Kelly Lines -

This axe, with its huge imprint on the axe head of the Raven, holds some mystique in the axe world today.  When we look at it - we see the imprint, the fine work of the logo, and think, how could someone swing that into wood?  Yet it was a popular lline in its day - and usually highly sought after.

Of course, a couple pics! 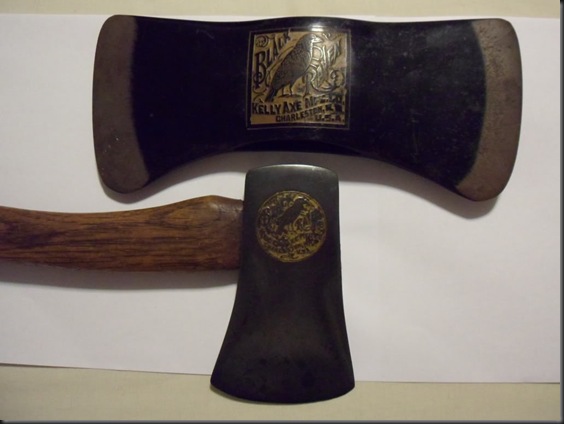 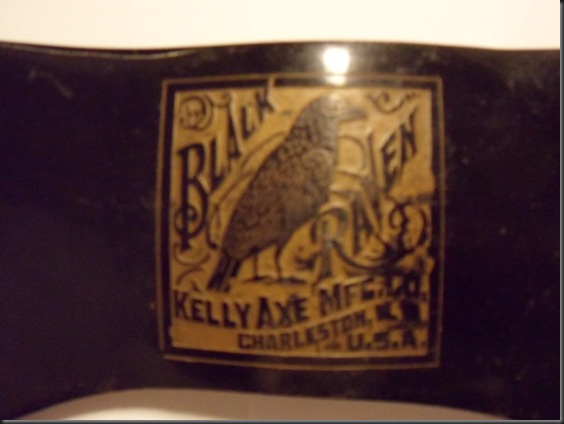 The Black Ravens will have various wording on the imprint, which will help you to date them.  Some say Kelly Mfg Co, Tool Co, Kelly Works, and even American Fork and Hoe on the imprint.  Also, sometimes it will say True Temper on the back - giving you a better feel for how old the piece is.

This is one of the more unique lines in the axe history world - Kelly had a line where each axe got its own registered number.  This was seen on double bits and single bits.  I have been searching trying to find a link between registered number, and year of manufacturer.  None has been found that I know of, and I have no idea if it even exists.  I wonder if a true axeman really even cared about the number LOL.

Here is an example - 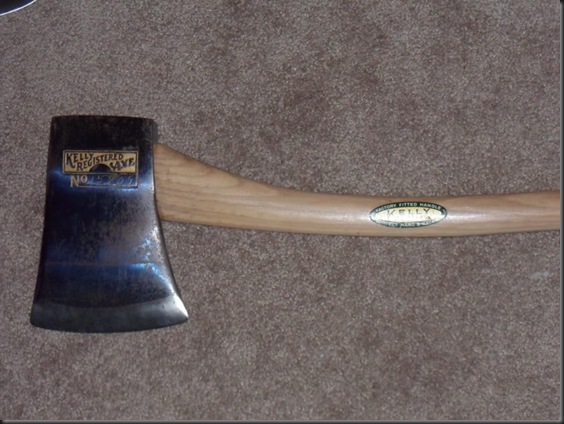 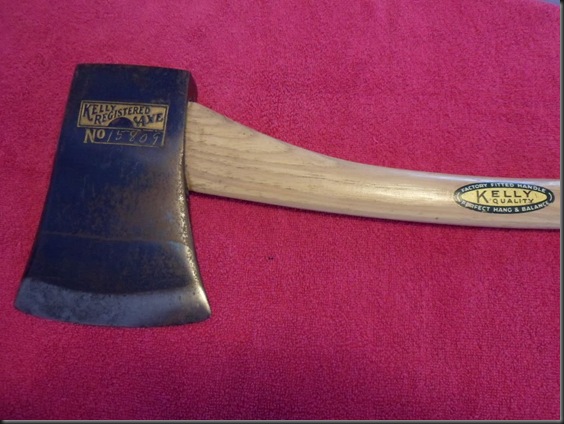 WellI hope this helped to shed a little light on the largest axe maker the world has ever seen.  It is a fascinating company, one with a long timeline, twists, turns, bumps and bruises.  I am sure that I left something out(like some of the other lines/companies they made for, like Marshall Wells), spelled something wrong, or messed up a date.  If I did please let me know.  Thanks to Axe Makers of North America, Yesteryear Tools, Kelly catalogs, other publications, and the good ole internet.  Hope you enjoy.

Email ThisBlogThis!Share to TwitterShare to FacebookShare to Pinterest
Labels: Axes